From particle physics to magnetic imaging 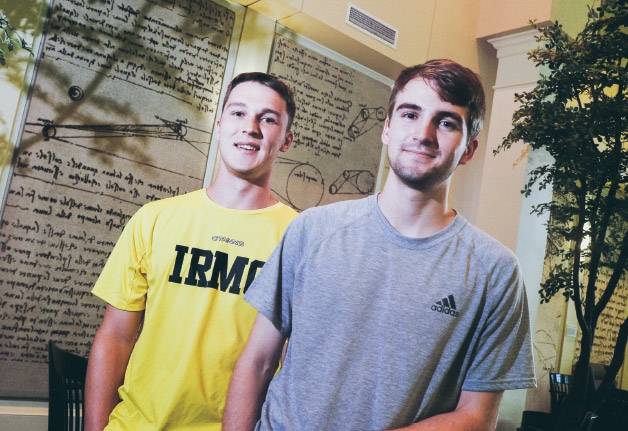 The Wofford College Department of Physics has two very good reasons to celebrate. Juniors David Aguillard and Hunter Wages have been selected for prestigious and competitive internships — Aguillard at CERN in Geneva, Switzerland, and Wages at the National Institute of Standards and Technology (NIST) in Gaithersburg, Md.

“I’m specifically interested in particle physics, so I’m incredibly grateful to have been accepted into this program,” says Aguillard. “The atmosphere at CERN is exciting, and they are constantly making scientific discoveries and breakthroughs, so my experience will further my academic and professional development.”

Aguillard’s project will involve the ATLAS detector, used to identify subatomic particles ejected from atomic collisions (for example, the discovery of the Higgs Boson particle). He will work with data refinement and analysis on long-lived particles, a specific branch of subatomic particles.

“David’s role will involve taking on big questions that ultimately attempt to understand what the early universe looked like, the physics of the first few moments of the birth of the universe and what is contained inside the walls of our universe,” says Dr. Carolyn Martsberger, assistant professor of physics. “Surprisingly, we know very little about what is out there. This exciting and challenging opportunity is perfect for David. In fact, any professor at Wofford who has had David knows firsthand that the big questions are always on his mind.”

“David is an outstanding student and we are thrilled that he will represent Wofford at CERN this summer. This REU is one of the most competitive and prestigious summer programs in physics, and he will be the first ever to attend from Wofford,” Martsberger notes. “He is a curious, thoughtful and incredibly dedicated student, and the department is excited to see what he gets to do in the summer.”

Wages, a physics and mathematics major from Columbia, S.C., will be with the NIST Physical Measurements Lab. The organization’s mission is to promote innovation and industrial competitiveness. Wages’ project will involve working with computer simulation and analysis for magnetic imaging.

“I’ve never dealt with this aspect of physics specifically, so I’m excited to be able to have this opportunity to learn, especially at a huge national laboratory such as NIST,” says Wages, who first heard about the internship from a neighbor who completed a similar internship at NIST. Wages worked with faculty of the physics department and with Dr. Mary Beth Knight, Wofford’s director of foundation, corporate and government relations, to complete the application process for the NIST Summer Undergraduate Research Fellowship (SURF) program that places students at one of seven NIST facilities.

“Hunter is a fantastic, hard-working student who has an aptitude for research. He takes the initiative on various parts of a project, and he is an efficient problem solver,” says Martsberger. “I have been fortunate to work with him in the lab. Just recently he devised a new solution that allowed us to bridge two large portions of our current study.”

“I’m looking forward to being around a group of people who are really driven within the fields of physics and math,” says Wages. “I’m ready to see how they solve problems and how I can learn from their example and bring it back to Wofford.”

“I like astrophysics, and while this internship isn’t directly related to that subject, it is a great way to get my foot in the door,” he says. “I’m hoping to figure out how best to pursue both math and physics following graduation from Wofford.”

“Hunter and David are both talented and highly motivated students,” Salley says. “Each have excelled in the physics classroom as well as in all their classes at Wofford. They are deserving and have earned these unique opportunities that will have a profound impact on their futures.”