Fighting cancer then interning with Microsoft 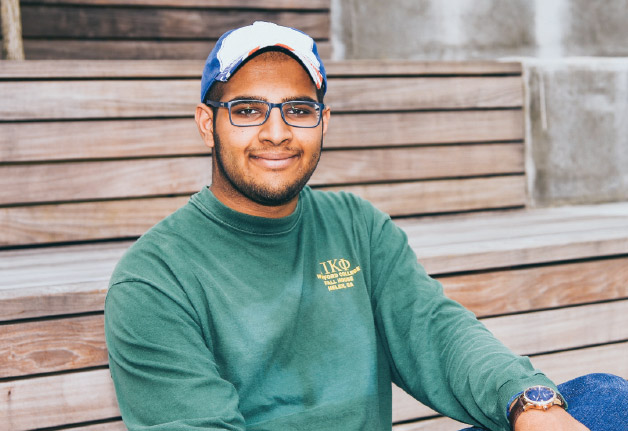 Only months after completing chemotherapy and radiation treatment for lymphoma, Nathan Patnam, a Wofford College junior, is spending his summer interning with Microsoft, one of the largest companies in the world.

"Once I got my diagnosis, I thought I can either complain about it or I can do something about it, so that's when I really committed myself to learning more about the computer science field," says Patnam. "I've been productive with my time throughout this experience, so I don't have regrets."

Patnam, a computer science major from Greenville, S.C., received his diagnosis in October 2017. After finishing out the fall semester with a 4.0 GPA, he took the spring 2018 semester off while receiving treatment, but that's not an exactly accurate description of the past three months. Although not formally enrolled as a student, Patnam attended tech meet-ups and conferences, did online tutoring and worked freelance jobs writing webpages for clients across the globe.

"Balancing chemo with school, social activities and freelancing was a double-edged sword," he says. "On one side having all that work to do made my treatment go by fast. But on the flip side, I had to work harder than I had ever worked before. In retrospect, this has helped me create a pretty strong work ethic and gave me a lot of motivation."

It was during this time that a recruiter from Microsoft reached out to him about an internship position. Within a day of submitting his resume, Patnam interviewed with the company. A week later, Patnam completed an extensive two-hour follow-up interview with Microsoft that he calls "The Gauntlet." The next day, he received the offer for the internship in Redmond, Wash. Patnam will spend 12 weeks with the Windows and Devices team, specifically working on .NET development, which is the basis and framework for many websites and applications.

"I'll be working in this environment where I'm able to talk to people who spent years and years perfecting their craft," says Patnam. "I'm excited to be using some of the leading programming languages and frameworks out there while making connections with people who are exceptionally bright."

Additionally, Patnam plans to continue his own side projects, including Hackathon competitions and further developing a computer science internship program at Wofford through The Space in the Mungo Center.

"The technical field is very different in terms of what needs to be listed on resumes or how interviews are conducted, so I'm trying to help other Wofford students with things like preparation for coding interviews or with getting employee referrals when applying to a company," he says.

Patnam previously interned with UnitedHealth Group in Schaumburg, Ill., and has worked with Wofford's IT department and web development team. He is already looking ahead to future internships with a stock trading firm and a defense contractor in order to explore different fields within which computer science is used. He also is looking ahead to remission. Patnam says he has bounced back fairly well from chemo and radiation, and doctors will monitor him frequently over the next two years. If he remains free of cancer during that time, Patnam says his
chances of relapse are greatly diminished.