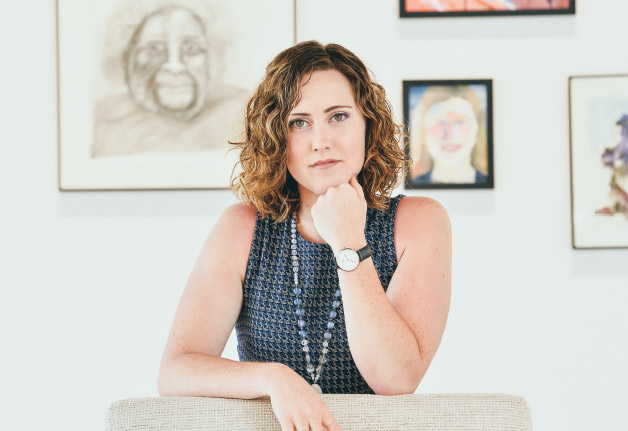 Like a detective seeking to solve a case, Wofford’s 2018 Presidential International Scholar Lydia Estes ’20 has been following even the smallest tidbits of clues as she travels to several developing countries to conduct independent research on the role of art in women’s rights movements in Latin America.

Estes, a Spanish and art history major with a minor in government from Carlisle, Pa., was named the college’s 35th scholar this spring by President Nayef Samhat, who said Estes “can see herself as an artist, as a researcher and as a leader. Her experiences as she travels over the next year will only serve to enhance her innate curiosity about the world in which we live, and we are proud she will represent the college as she goes.” The scholarship is funded by an anonymous donor.

After just beginning her travels and research in July, starting in Chile, Estes says her research so far has been more “organic” than she anticipated. “I didn’t intend to approach this project so organically, but just by opening my mouth and introducing myself to strangers, I have fortunately found many artists and individuals who I look forward to interviewing in the coming months,” she says.

For example, Estes says she mentioned her project to her advisor as she was selecting classes in Chile. The advisor old one of her professors about the research, and on the first day of class he recognized her and interrupted class to tell her about a feminist poetry reading coming up that weekend at a local coffee shop. “I ended up meeting a woman at the reading who performs with a feminist theater group, and she invited me to their performance the following week.”

Her research has included many such chance encounters in addition to “mental note-taking at the dinner table and in the streets, anywhere I can gather more insight on the issue of feminism in Chile,” she says. “I have a running list of artists whose work I’ve seen in galleries who I want to contact; I have messaged via social media graffiti artists who have a major presence in Valparaiso; and I’ve started following pages on Facebook, such as the feminist theater group.

“Like a detective solving a case, I have laid out a map of ‘persons on interest’ (artists) and ‘clues’ that I hope will lead me to an answer of some sort.”

Estes says she was particularly interested in and excited to interview an artist named Kheni Lamb, whom she discovered at a cultural fair in Valparaiso. “She is a graphic designer with a personal collection of artwork titled ‘GRL PWR.’” Estes’ favorite painting by Lamb depicts a girl who stands confidently with hands in the pockets of her high-waisted jeans – “her posture is powerful and her outfit reflects a certain hard-working characteristic, and in her mouth is a pink bubble on the verge of popping. The graphic on her shirt reads, ‘burst the patriarchy,’ in a bold, all-caps font.

“The art history student in me thoroughly enjoys visually analyzing the artist’s use of color and line, while I simultaneously make notes about the iconography,” Estes says. “I can hear my Wofford professors’ voices in the back of my head reminding me about the ways to ‘read’ a work of art. It feels incredible to apply what I’ve learned in the context of Renaissance or Islamic art to highly contemporary and informal art settings in Latin America.

“I look forward to understanding this artist’s way of representing ‘las mujeres,’ or women,” she adds.

In addition to Chile, Estes will travel to Uruguay, Brazil and Ecuador. With her plans to visit Nicaragua canceled due to the changing political climate in Managua, Wofford alumnus Herbert Francisco Curry Arceo ’89 is attending to have a colleague help Estes arrange to travel to Peru or Argentina instead. “Mr. Arceo originally reached out to me to give me his congratulations on being selected as the scholar and to offer assistance to me through his connections or contacts he has with the World Bank, where he works,” she says.

Following her travels and research as the Presidential International Scholar, she plans to spend 12 weeks in Paris and Rome as part of her original study abroad plans made before she was named the scholar.

On her return to Wofford’s campus in the fall of 2019 for her senior year, Estes will create a reflective, mixed-media piece centered on her photographs taken for her scholar research, to be presented to campus and other audiences.

To read more about Estes’ research plans as the Presidential International Scholar, go to https://www.wofford.edu/newsroom/2018/Pennsylvania-student-named-Wofford-Presidential-International-Scholar/, and follow her on her travels by reading her blog at blogs.wofford.edu/Lydia-Estes.