A gathering of mutual friends (and familiar faces) 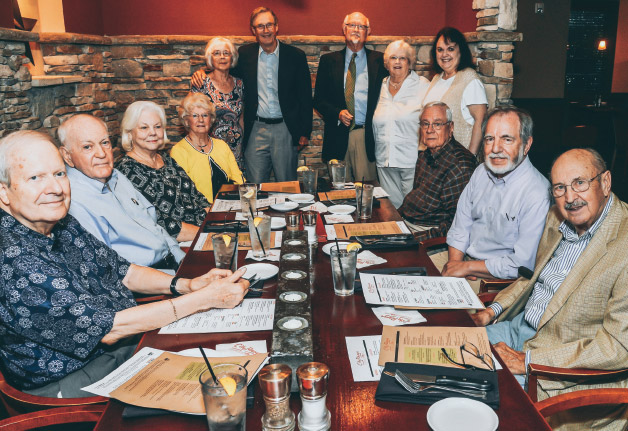 “They joked that it was the only time that they could afford to eat out,” says Dr. Ross Bayard, professor emeritus of history.

No one knows for sure when Club 25 started, but Bayard’s best estimate is that the club’s first meeting was in the late 1950s or early 1960s.

According to Bayard, who was the first member beyond the originals, Keller Cogswell (deceased) joined after his retirement. Dr. John Bullard, Kit and Dr. Dan Maultsby ’61, Fran and Dr. Philip Racine and Bertice and Dr. Richard Robinson ’61 followed. The next wave of members included Louisa and Dr. Oakley Coburn, Dr. Jim Keller (deceased), Jane and Dr. Jim Proctor, Linda and Dr. Dave Whisnant and Peggy and Dr. Charlie Kay (the new kids on the block and the only non-retirees in the club).

Today, as when Club 25 was founded, there are no officers, no committees and no dues.

Linda Whisnant keeps the current calendar, and members rotate monthly restaurant selection and hosting duties. Ann Leonard originally maintained the calendar. She and Denny Jones are the only surviving original members, but neither are able to attend monthly meals.

“A lot of conversations start with, 'Do you remember when…,'” says Louisa Coburn, whose grandfather, Dr. A.M. Traywick, professor emeritus of religion, has been the subject of some of those tales. “Sometimes we’re not sure where truth ends and fiction begins.”

Several Club 25 members have been active participants in Lifelong Learning at Wofford. Kit Maultsby picked up painting after a Lifelong Learning course. Bertice Robinson and Louisa Coburn are also artists. Dan Maultsby continues to work with the college, helping students apply for major postgraduate scholarships. Oakley Coburn also continues to support the college’s efforts to develop the permanent collection. Recently, he was instrumental in securing and restoring the Julia Elizabeth Tolbert Collection. Bullard still plays the organ for the Moravians, a group that meets in the chapel of Central United Methodist Church. He serves as the Central archivist and writes book reviews for The Diapason, an international magazine for church musicians. Bayard is planning another trip in March, this time to Spain (he was in Portugal last year), and the group continues to tease Charlie Kay as the only Club 25 member who’s still teaching a full load at Wofford.