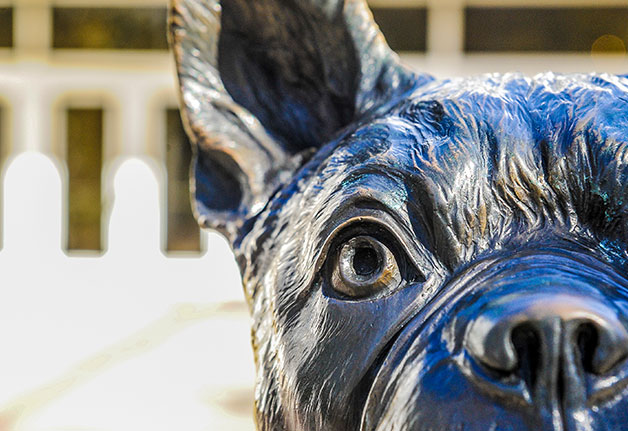 1956
Manning Live magazine featured a story on the Rev. Regi Thackston, who celebrated his 19th year as the pastor of Edwin Boyle Santee Summer Ministry, fondly known as “Boat Church.” After Thackston retired from Trenholm Road United Methodist Church in Columbia, he and his wife, Yvonne, moved to Sumter, S.C., to be near their grown children. He has been serving the summer ministry since.

1965
Ernest Ray Allen recently was awarded an honorary doctorate from the University of South Carolina Aiken for his long and productive career as a leader and champion of higher education. He served on the Aiken County Commission for Higher Education for more than two decades and has been the commission chair since 2014.

1968
In June 2018 Dean Hartley published his third book, “An Ontology for Unconventional Conflict,” with Springer Publishing. The book references conflicts in Bosnia and Afghanistan as well as humanitarian and natural disasters. He continues working as principal of Hartley Consulting and lives in Oak Ridge, Tenn., with his wife, Eileen.
Spartanburg County’s longest-serving magistrate, the Hon. James B. Paslay, was awarded South Carolina’s highest honor, the Order of the Palmetto, in May. Paslay served as a magistrate for 45 years, retiring at the end of June.

1969
Marvin W. “Dub” Chapman II recently retired from the University of North Carolina at Charlotte following 18 years as a clinical professor in the Department of Reading and Elementary Education. He worked in public education for 49 years. He and his wife, Betsy, live in Sherrills Ford, N.C.

1971
The Rev. Richard Allen was among the speakers in the 2018 Asbury Memorial United Methodist Church Summer Preaching Series. Allen is a retired pastor and a member of the New York Annual Conference.

1978
J. Barnwell Fishburne represents the Sixth Congressional District on the South Carolina Department of Transportation Commission. He is the owner of Fishburne and Co. Development Corp. in Walterboro.
The Rev. Dr. Kim Strong and his wife, Margo, have moved to Conway, S.C., where he is the new pastor of Trinity United Methodist Church. This fall he will begin his 40th year as a pastor.

1986
Sandy Martin retired after 30 years of teaching high school mathematics. She is now an adjunct math professor at the University of South Carolina Upstate and Spartanburg Community College. She lives in Boiling Springs, S.C.

1989
South State Bank announced the hiring of Jeff Reeves to support commercial middle-market growth across the Carolinas. Reeves, based in Columbia, S.C., has more than 25 years of experience in the area.

1990
Dr. Douglas Wood, who was Wofford’s 2018 Commencement speaker, received an honorary Doctor of Letters degree from the Middlebury Bread Loaf School of English in Ripton, Vt. Wood is a senior fellow of justice, equity and opportunity at the Aspen Institute. In May he also received the Harvard Graduate School of Education Alumni Council Award in recognition of his tireless work to ensure that low-income, first-generation college students receive high-quality postsecondary education, including his continued efforts in improving high school and college completion rates.

1994
David Harrell and his wife, Maureen, announce the birth of their son, Adrian McGinness Harrell, born May 9, 2018. The family lives in New York, N.Y.

1995
Brian Taylor has joined the Miller-Valentine Group in Columbia, S.C., as vice president of business development. He will be responsible for driving business growth by identifying, structuring and coordinating construction and development opportunities in the Southeast.

1997
Security Info Watch, an online magazine for security executives, included an article — “3 strategies for adopting new security technologies” — by Jason P. Hatfield in its June 12, 2018, edition. Hatfield is a director of client development for Knightscope. He lives in Roswell, Ga., with his wife, Amy.

In May, the Ralph H. Johnson VA Medical Center in Charleston, S.C., appointed Dr. Amanda Camlin La Rue associate chief of staff for research. She also serves as chairman of the board of Charleston Research Institute, associate professor in the Department of Pathology and Laboratory Medicine and a faculty member in the Center for Biomedical Imaging at the Medical University of South Carolina.

Bryson Worley recently was named the director of golf/head men’s golf coach at the University of North Georgia in Dahlonega.

In May, Dr. Michael Mikota, the president of Central Carolina Technical College, gave the commencement address at Thomas Sumter Academy in Sumter, S.C. The valedictorian of the class was Marley McCormick ’22, who has followed her brother Drake McCormick ’18, 2017-18 Campus Union president, to Wofford. The valedictorian the year before was Ross Campbell ’21. Mikota enjoyed making the Wofford connections.

2000
Michael Anzelmo is the chief of staff and legal counsel to the speaker of the South Carolina House of Representatives. In this role he provides legal advice on legislation and other matters as well as manages all aspects of litigation for the House of Representatives. He also coordinates House and speaker staff.
Elliott Goldsmith has been elected to the board of directors of Bank of Travelers Rest in South Carolina. He has served on the advisory board at the bank’s North Pleasantburg location since 2014. Goldsmith is a franchise owner for the Firehouse Subs chain.

In July, Brackish owners Ben Ross ’01 and Jeff Plotner ’01 were invited to represent South Carolina at the White House for the Made in America Showcase. They sported their famous Brackish bow ties and took photos with lots of political figures.

2003
Chad Johnston and his wife, Frances Clark, welcomed their second daughter, Frances “Claiborne” Johnston on Nov. 20, 2017. Chad is a shareholder in the law firm of Willoughby and Hoefer in Columbia, S.C.

2004
Thomas Brake Blanton was born April 5, 2018. He is the son of Steven Blanton and Anna Richardson Blanton ’09 and the little brother of Wells Blanton.

The Santee Cooper Board of Directors named Shawan Gillians treasurer of the organization. She had been serving as the interim treasurer since March 2017.

2006
Allen Taylor is selling the full portfolio of Anheuser Busch products to chain convenience stores as a chain store account manager for KW Beverage in Columbia, S.C. He and his wife, Holly, live in Irmo with their two children, Rivers (3) and Brooks (born March 14, 2018). In addition to a Wofford degree, Taylor also holds a master’s degree in clinical counseling from Columbia International University.

2007
Parks Bunch has joined the Boyer Commercial Construction team as a project management professional. Previously, Bunch spent three years in the manufacturing industry and eight years as an officer in the U.S. Army. Boyer is a veteran-owned general contractor, construction manager and design builder in Columbia, S.C.

Dr. Duncan Norton completed his pediatric residency at Palmetto Children’s Hospital in 2017. He completed a primary care ultrasound fellowship at the University of South Carolina School of Medicine in July 2018, in which he was actively involved in the education of medical students and residents in the use of point-of-care ultrasound. He now has joined Palmetto Health Children’s Hospital as an assistant professor of pediatrics. His wife, Mariel Denise Willenberg Norton ’08, is an attorney with Baker, Ravenel and Bender. They live in Columbia, S.C.

Whit Perrin has joined the law firm of Luzuriaga Mims as an associate in Charleston, S.C. He practices insurance defense litigation.

2008
Tyler P. Crahan is a vice president managing the eastern region of the Cincinnati, Ohio, market with Fifth Third Bank. His son, Jackson, just celebrated his first birthday on July 1, 2018.

A family medicine physician and flight surgeon, Dr. Ben Friday was promoted to major in the U.S. Army. He is stationed at Fort Campbell, Ky., with his wife, Dr. Katie Friday, and their two children, Rock and Ginny. They plan to return to Spartanburg in 2019.

Dr. Erin Herstine graduated from her pediatric residency in June 2017 and now is pursuing a fellowship in pediatric critical care at Johns Hopkins University in Baltimore, Md.

Living in Anderson, S.C., Dr. Jamie McClain is an oncologist with the Anderson Area Cancer Center.
Kyle Walker has joined the Greenville, S.C., branch of Hilliard Lyons as a wealth advisor. He holds the chartered retirement planning counselor designation.

2009
Mitch Clark and Libby Weihsman were married June 9, 2018. The couple lives in Charlotte, N.C., where Mitch is a finance manager with Novant Health Presbyterian Medical Center and is pursuing an MBA from University of North Carolina at Charlotte. Libby is a freelance journalist and graduate of UNC Charlotte.

2010
An attorney, Kate Brown has joined Nexsen Pruet in Greenville, S.C., as an associate. She will focus on employment-related issues.

Justin Hunter has joined the insurance defense firm of McAngus Goudelock & Courie in Columbia, S.C. He focuses his practice on workers’ compensation.

Sadler Walker is director of asset management for the Carroll Organization in Atlanta, Ga. He is responsible for portfolio asset management, capital partner relations, reporting and overall investment performance. He works with senior leadership to develop and implement investment strategies to maximize performance and returns. Additionally, he assists with implementation of value-add strategies and annual budgeting as well as holding responsibility for portfolio insurance and tax management.

Jeremy Panter and Marett Keasler ’12 were married on March 17, 2018, in Lake Toxaway, N.C. They live in Gainesville, Ga., where Jeremy is an attorney with Whelchel, Dunlap, Jarrard and Walker, and Marett is a registered nurse with Northeast Georgia Health Systems. She also is pursuing a master of science degree in the acute care nurse practitioner program at the University of Alabama at Birmingham.

Scott Bradley Wasserman Jr. and Betty Suiter Coxe were married on April 28, 2018, at Prince George Winyah Episcopal Church in Georgetown, S.C. They honeymooned in Thailand before making their home in Georgetown.

2012
Victoria Bone graduated from American University of the Caribbean School of Medicine in May 2018 and matched into an obstetrics and gynecology residency at Louisiana State University, Health Sciences’ Women’s Hospital in Baton Rouge.

Will Starnes has joined McAngus Goudelock & Courie in the firm’s real estate law group. His practice, based in Columbia, S.C., focuses on residential real estate transactions and estate planning.

2013
Dr. Julie Brown graduated in May 2018 from the Medical University of South Carolina in Charleston.

In January, Lizzie Frantz became a tax senior with Elliott Davis. She lives in Charleston, S.C.

Valerie Fulton has joined Ogletree, Deakins, Nash, Smoak & Stewart in Columbia, S.C., as an employment litigation associate. She earned her J.D. from Washington & Lee University School of Law in 2017.

The Spartanburg Area Chamber of Commerce recognized Atlas Organics with its James B. Thompson Small Business of the Year award. The company, which received the award for its growth and innovation in recycling and composting, was founded in 2013 by Joseph McMillin and Gary Nihart.

2015
Hank Davis and Ashlee Moody were married on Nov. 18, 2017, at First United Methodist Church in LaGrange, Ga. They enjoyed celebrating their wedding weekend with a large group of Wofford friends before settling into married life in Washington, D.C., where Hank is a client relations associate for DDC Public Affairs and Ashlee is the administrative manager for the Victims of Communism Memorial Foundation.

Elizabeth Sullivan Short and Robert John Barreto Jr. were married at First Presbyterian Church in Greenville, S.C., on June 23, 2018. She is an interior designer with Dalton Interiors in Greenville.

In April, Zack Morrow received a National Science Foundation Graduate Research Fellowship in Mathematical Sciences. The nationally competitive program provides tuition, fees and a living stipend for three years of doctoral study in a STEM field. Each year about 2,000 fellowships are awarded from a pool of approximately 12,000 applicants.

2017
Eric Garcia, who has been playing basketball overseas, announced that he has signed with the Sodertalje Kings, a Swedish powerhouse. He was back in the U.S. over the summer to host his first basketball camp for grades three through nine in his hometown of Aurora, Colo.

2018
The Winnipeg Goldeyes signed true rookie outfielder McClain Bradley. Bradley hit .355 in 58 games with 52 runs scored and 20 stolen bases as a Terrier during his senior year. He was chosen for his speed and athleticism.