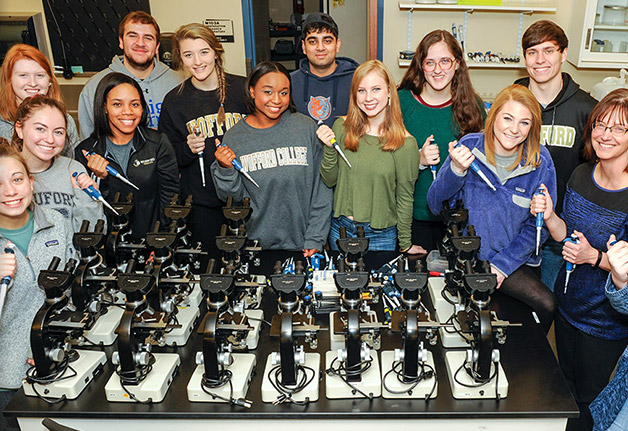 As part of Wofford College’s ongoing efforts to expand educational access for underrepresented students, the college has joined the American Talent Initiative (ATI), an effort to substantially increase the number of talented low- and moderate-income students at the nation’s top-performing undergraduate institutions with the highest graduation rates.

Wofford joins 67 of the nation’s most respected colleges and universities in the alliance, including Harvard, Princeton, Yale and Johns Hopkins, in the commitment to enhance efforts to recruit, enroll and support lower-income students, learn from each other and contribute to research that will help other institutions expand opportunities.

“Our nation’s best colleges and universities are enhancing our commitment as vehicles of opportunity for future generations,” Wofford President Nayef H. Samhat says. “Wofford looks forward to working with its partners in ATI in carrying out the mission to provide the best education for talented students regardless of their financial background and means. ... Wofford’s extraordinary and transformational educational experience is accessible to all, including socio-economically underrepresented students, and through this ATI partnership, we will broaden our accessibility even more.”

Wofford previously has announced other initiatives to address these issues, including committing $300,000 in scholarships for first-generation college students from South Carolina.

The New York Times has recognized Wofford as one of the most economically diverse colleges in the country and named Wofford among the “Top Colleges Doing the Most for Low-Income Students.”

Launched in December 2016, the American Talent Initiative is supported by Bloomberg Philanthropies and was founded with a national goal of educating 50,000 additional high-achieving, lower-income students by 2025 at the 270 colleges and universities with the highest graduation rates. Based on the most recent federal data available, there are approximately 430,000 lower-income students enrolled at these 270 institutions. ATI’s goal is to increase and sustain the total number of lower-income students attending these top-performing colleges to about 480,000 by 2025. To reach this ambitious goal, ATI aims to add more top-performing colleges to its membership in the coming months and years.

Wofford College recognizes that America’s top-performing colleges have an important role to play in this effort. Research shows that when high-achieving, lower-income students attend institutions such as Wofford, they graduate at higher rates and are more likely to hold leadership positions and enjoy opportunities for advancement. Yet in each graduating high school class, there are at least 12,500 lower-income young people with outstanding academic credentials who do not enroll at institutions where they have the greatest likelihood of graduating. These students have earned opportunities, but for a variety of reasons — including a lack of information about their options, confusion about costs and inadequate financial aid offers — many of them simply lack access. ATI seeks to ensure that these “missing” students have a path to attend and thrive at the institutions with the highest graduation rates and best track records for postgraduate success.

Colleges and universities participating in ATI will further the national goal of developing more talent from every American neighborhood by:

Wofford College and other ATI members will share lessons learned as well as institutional data, and throughout the coming the coming years, will publish annually their aggregate progress toward meeting the national goal of 50,000 additional lower- income students by 2025. The Aspen Institute’s College Excellence Program and Ithaka S+R, the two not-for-profit organizations coordinating the initiative, will study the practices that lead to measurable progress and share that knowledge with field through regular publications. The first of these publications focusing on financial strategies to bolster lower-income student success was published in February on the ATI website at www.americantalentinitiative.org.

Member institutions of the ATI are committing substantial resources to attract, enroll and graduate students at their individual campuses. This initiative is co-managed by the Aspen Institute’s College Excellence Program (www.aspeninstitute.org/college-excellence) and Ithaka S+R (www.sr.ithaka.org) and funded with an initial $1.7 million, multiyear grant from Bloomberg Philanthropies. Grant funding will be used for best-practice research and dissemination, meetings of college presidents and staff, and data analysis and reporting.

Institutions participating in the American Talent Initiative (*members joining in January-April 2017) are: