They will never forget 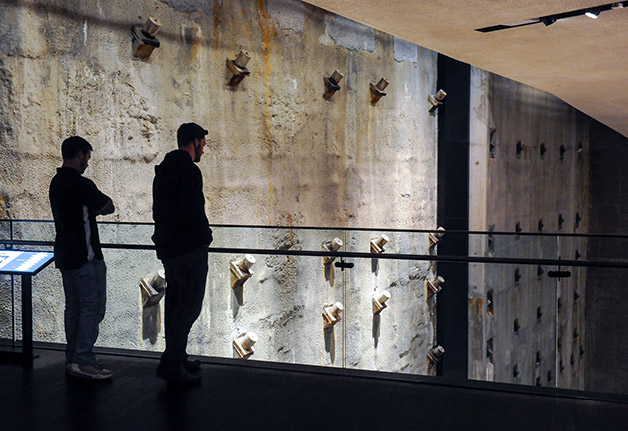 Spencer Kulman ’17 was a first-grade student in Westchester, N.Y., when two planes crashed into the World Trade Center on Sept. 11, 2001. He remembers waiting in the school’s hallway, watching his teacher crying, then hearing that the school was on lockdown. While he waited, confused, for his mother to pick him up from school, Joe Graziano Sr., a firefighter from Engine 22, Ladder 13, searched the north tower, clearing floors the size of football fields, beginning with the 24th and moving down. Of the 10 firefighters from his station who went into the building that day, he was the only one to make it out alive.

The two met in New York over spring break at the National September 11 Monument and Museum, along with the rest of the Wofford baseball team, and it’s an experience none of them will ever forget. “It was a beautiful day. Not a cloud in the sky. The temperature was great.”

“You didn’t think anything bad could ever happen on that day.”

That’s how Graziano started his talk to the team, most of whom had limited memories of Sept. 11 because they were so young when it happened. Graziano, who had not spoken publicly about the day until talking with the Wofford team, gave them an account of the events: sitting around the kitchen table in the firehouse joking with his FDNY brothers, seeing the first plane go into the north tower, contacting his wife about leaving a key for his son because Graziano now was anticipating a change in his routine, seeing the second plane hit, realizing it was terrorism and not just a horrible accident, getting the call to go to the World Trade Center.

“We went from my firehouse, right through Central Park to the West Side highway. ... We were flying. Police were directing traffic. No one was allowed on the streets. We got there in about five minutes,” says Graziano, who, along with other fire fighters, immediately reported to the command center. “First they told us to take our coats off, then they said gear up. ... We serpentined our way to the north tower — the first one hit — through falling glass. People were jumping. At the time we thought we were safer inside the building than out. We knew right then and there that we were in trouble.”

They went in anyway: Tommy Casoria, Mike Elferis, Graziano, Tommy Hetzel, Walter Hynes (captain), Vinny Kane, Dennis McHugh, Marty McWilliams, Tommy Sabella and Greg Stajk. All died when the north tower collapsed, with the exception of Graziano, who was helping another firefighter get a 300-pound man who was having a heart attack down the stairway to an ambulance.“He was ready to give up, so I said, ‘What’s your name?’ He said, ‘Ralph.’ ‘Ralph,’ I said, ‘we’ve got to keep moving. This is something you’ll be able to tell your grandkids one day.’ Eventually we had to move his legs for every step. I thought about my three boys and daughter. I thought, ‘Who’s going to play ball with my kids if I’m gone?’ I just wanted to get this man out, get him to an ambulance and get back inside to my friends.”

Graziano made it out with Ralph, but when they were about 50 yards outside the doors, the building started to collapse.

“I looked up, and it looked like the building was coming right at me,” says Graziano. “Ralph fell, and I laid on top of him. We got buried — not bad, but we were buried. The dust ... you gotta remember this was 220 stories of offices.

After it was over you couldn’t find a telephone. You couldn’t find a computer. The only thing that survived was paper. ... Your face started to expand from all the dust.”Once Graziano saw that Ralph had medical attention, he tried to radio his FDNY brothers. He walked back and forth from Battery Park to Stuyvesant calling them. Then he spent weeks checking the rubble for their bodies and the bodies of other victims.

As the Wofford baseball team listened to Graziano tell his story, they started to get a sense, some for the first time, of the magnitude of the tragedy. Graziano told the story from the perspective of a brother who lost his brothers — something that resonated with a team as close as Wofford’s baseball team.

“That day sticks out mainly because it was different,” says Kody Ruedisili ’17, an economics and finance major from Jupiter, Fla., who came to Wofford because of the close community. He was in the first grade during the attack. “I was the last one in class because the other kids were getting picked up. When my mom came, she took us for ice cream and tried to explain. I was shocked when Coach I (Todd Interdonato) told us that we were the first team that Joe was willing to talk to.”

One of the most powerful things Graziano did was tell the Wofford student-athletes a little something about each of his FDNY brothers.“Captain Walter Hynes was a lawyer, besides being captain in the NYC fire department. He would do pro bono work for anyone.”“Marty McWilliams was a plumber. Lots of firefighters did work on the side. I was a pub owner.”

“Mike Elferis was an Upper East Side bartender — a favorite with the girls.”

“Tommy Casoria was a short stocky guy. He was our shortstop (softball is serious business for the FDNY) ... always the dirtiest guy on the field. Tommy was found in 2015. ... I was the guy that identified him.”

“Greg Stajk pitched a no-hitter at Kings Park High School. ... He was an artist — 20 years I worked with the guy and didn’t know he was an artist.”“Tommy Sabella was a carpenter and an excellent practical joker. He would actually design practical jokes and could fix and do anything.”“Tommy Hetzel was an electrician. He would just sit and talk to Chris, my younger son.”“Dennis McHugh was a real young guy with three children. He was rock solid — a rugby or Irish football player.”“We thought we had plenty of time,” Graziano explained, looking out across the solemn faces, some of whom were wiping tears from their eyes. “We lost nine guys, but only found eight. The last guy I saw before leaving the building was Tommy Sabella; he’s the only one we couldn’t find. I knew right where he was. ... Forty percent of families that lost loved ones that day have never found their remains.”

After hearing Graziano and walking through the museum — seeing the twisted I-beams made of two-inch steel, reading the bios of those who died, absorbing the darkness, hearing the calls from people who knew they were never going to leave the building alive, marveling at the things that miraculously survived — Max McDougald ’18, a government major from Anderson, S.C., sat with his teammates processing the experience.

“Coach I tried to explain this to us before, but nobody could describe it,” he says. “We knew it was going to be a big day, but after hearing Joe speak and walking through the museum. ... He lost all of his brothers. I made the connection to my teammates, which made the experience hit home harder. This is going to change my life and how I go about my day.”

September 11, 2001 changed the lives of so many people. Graziano spent weeks after the attack talking with the grieving families of firefighters about what it was like in the building and his last memories of the men they loved.

“I don’t think that there’s a baseball team in the country that’s had the experiences we’ve had at Wofford,” says Kulman, a pitcher for the Terriers. “The things I’ve experienced here … I don’t even know that baseball is the best part.”

That’s just fine with Interdonato, head coach of the Terriers since 2007. “Our guys are students first, which means we expect them to learn in the classroom and on the field. I want them to have experiences that will make them better people, not just better baseball players,” says Interdonato, who met Joe Graziano Jr., former Georgetown Hoya pitcher, at a baseball recruiting showcase in New York state the year before. Graziano shared his dad’s story with Interdonato, and the two worked out every detail of a plan for Graziano Sr. and the Wofford baseball team to meet.

The experience was in line with others that Interdonato had organized. Last year the team played Baylor over spring break. Guys on the team from Texas enjoyed crowds of their relatives and friends watching and cheering in Wofford gold and black. Over the past four years the team also has traveled to Nashville, Tenn., and Rome, Italy. This year the spring break trip included a series with Villanova (outside of Philadelphia) and a game against Navy (in Annapolis). Besides the detour to New York, the team also spent a day in Washington, D.C.

“I’m thankful to Wofford baseball for driving in the opposite direction, and going out of their way to come to New York to learn more about and honor those we lost that day,” says Graziano Jr.

Before leaving, the Wofford baseball team gave signed game balls to the Grazianos. The Grazianos then presented the team with black T-shirts with the FDNY logo, the words “NEVER FORGET” and the names of the fallen from Engine 22, Ladder 13 on the back. The team wore them proudly in warm-ups against Navy. “It’s a way to honor their memories,” says Graziano Sr.