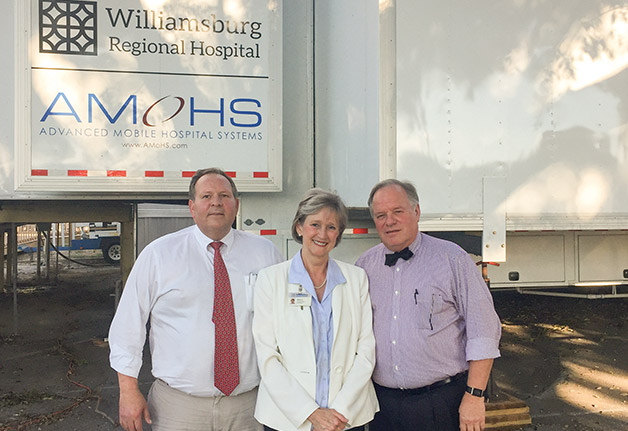 Dr. Troy Gamble ’76 knew from an early age that he wanted a career in medicine. He chose Wofford based on its reputation for producing successful medical students, and then went on to attend the Medical University of South Carolina in Charleston. After a long and fruitful career — beginning in a family physicians office and ending in the hospice system — Gamble was preparing for retirement when he received a call to join the team of Williamsburg Regional Hospital in Kingstree, S.C.

The hospital was in poor shape and millions of dollars in debt when Gamble took the reins as chief medical officer.
During his first days on the job, Gamble says he was thinking, “What have I gotten myself into?” Despite dilapidated conditions and a financial crisis, Gamble dove in and committed himself to revitalization.
“Wofford taught me persistence,” says Gamble, referring to the rigorous academics and the accountability required by the Wofford faculty. The discipline and determination he developed were essential then and still remain keys to his success.

After several years of devoted labor, the hospital was set to make a profit for the first time in years. Then on Oct. 5, 2015, record-breaking flooding devastated South Carolina. The Black River, which runs through Kingstree, breached its banks. Water made its way into the walls of the hospital, later creating issues with mold and asbestos. A Department of Health and Environmental Control inspection forced the hospital to close its doors.
For Gamble, the hospital’s prognosis, which involved laying off employees, turning away patients and permanently cutting off a source of community health care, was unacceptable. Over the past year, Williamsburg Regional Hospital has been functioning out of temporary emergency structures in its parking lot and in the offices of local physicians. With aid from FEMA and the state, the hospital has secured the funding required to build “temporary long-term” structures that will provide all the services of the former hospital. The plan is for these “temporary long-term” structures to last for several years, while hospital leaders work to build a new state-of-the-art hospital in the community.

“It’s been two steps forward and three steps back,” says Gamble, but persistence is paying off, and Gamble and hospital supporters remain hopeful and committed.