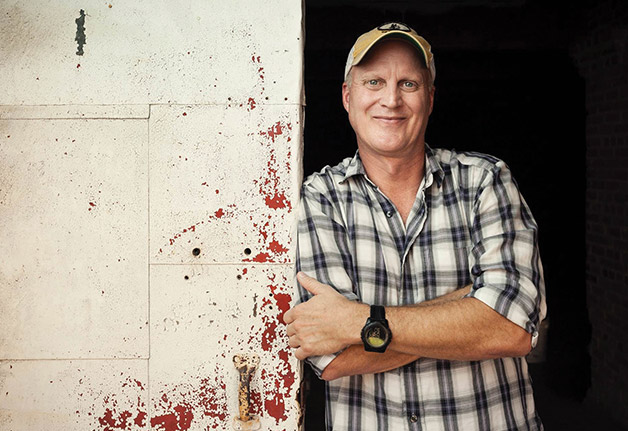 “If you are a sane, intelligent reader needful of stories that involve the heartbreak and hilarity of childhood, then you will cherish Scott Gould’s perfect collection of linked stories, ‘Strangers to Temptation.’”

Scott Gould ’81, chairman of the Creative Writing Department at the South Carolina Governor's School for the Arts and Humanities, got pretty excited when he saw the cover of his debut collection of award-winning short stories.

“Yeah, that’s a nervous, hopeful, breath-sucking moment, when you get the email from the publisher with the subject heading ‘Your cover!’ ... Hub City kept me in the loop the whole time, so when I saw the finished cover for the first time, it wasn't a complete and total surprise,” says Gould. “Still, it was pretty damn exciting opening that file and seeing that bridge and those guys jumping into the Black River.”

Gould wrote “Bases” and “You Dream, You Leave” in the early 1990s, both set in his hometown of Kingstree, S.C., during the 1970s. The same 13-year-old narrates both. Almost a decade later, Gould returned to Kingstree for inspiration.

“I truly believe that most writers have a place they can't escape, where they are comfortable, a place they feel obligated to tell stories about. Kingstree is that place for me,” says Gould. “A couple of springs ago, when school let out, I needed to warm up for a long summer of writing ... doing some calisthenics on the page. I thought, ‘Maybe I should write another Kingstree story,’” says Gould.

Before Gould knew it he had seven new Kingstree stories and a collection worth sharing.

“Strangers to Temptation” takes readers to a place in time where religion and race provide the backdrop for an often uneasy coming of age. Linked by a common voice, Gould's 13 stories introduce a cast of uniquely Southern characters: a Vietnam vet father with half a stomach who plays a skinny Jesus in the annual Easter play; a mother/nurse attempting to heal the world, all the while sneaking sips of Smirnoff and Tang; a best friend whose reckless dive off a bridge earns him a fake eyeball and a new girlfriend; and the narrator, a baseball-playing, paper-delivering boy just hoping to navigate the crooked path out of adolescence.

“I always tell students NEVER to listen to that ancient creative writing cliché that you should only write what you know. Rather, I tell them to write what they know well enough to lie about,” says Gould, who lived in Kingstree between the ages of 5 and 14. “Those are important years. You learn a lot about life and love and death and community and laughter and despair and connection and heartbreak during those years. And for me, that chunk of years occurred in the late 1960s and early 1970s, when the schools were desegregating and new boundaries were being drawn, while the old boundaries were supposedly being erased.”

Gould, whose poetry, fiction and nonfiction have been published in Kenyon Review, New Madrid Journal, Carolina Quarterly and New Stories from the South, says his career as a writer started at Wofford.

“Wofford runs through all of it,” he says, “and I don't ever take that for granted.”

“Strangers to Temptation” will be released on June 6, but it’s available now for preorder at hubcity.org/press/catalog/fiction/strangers-to-temptation.