Reaching back and paying it forward

The impact of the Atlanta Invitational and the Wofford-Atlanta community. 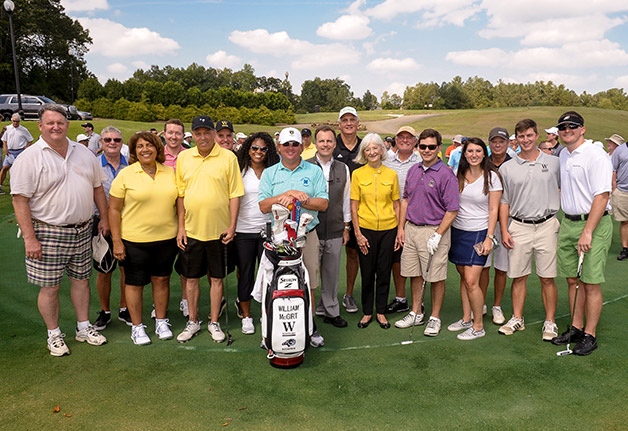 When he graduated from Wofford, Chris Carpenter ’90 moved to Atlanta for law school at Emory University. Shortly after that move, he received an invitation to meet with Walt Sessoms ’56 in his BellSouth headquarters office.

“I was a first-year law student, and here I was sitting in Walt Sessoms’ office. I couldn’t believe that someone at his level would take an interest in me,” says Carpenter.

Carpenter, now a member of the Wofford Board of Trustees and a political and policy strategist and partner in the Peachtree Battle Group, was initiated into the Wofford-Atlanta community with that conversation, and like so many others, has remained connected to Wofford because of that support.

“We had a case of beer on my back deck,” says Wile. “We ended up with 14 teams that first year and raised about $1,600. Walt didn’t play golf, but he asked if he could borrow my son’s golf clubs and shoes so he could participate.”

A year later the group was back on Wile’s deck with another case of beer and a mission to raise more money for Wofford.

“I think we raised $1,800 that second year,” says Wile. “That’s when my wife, Vickey, says, ‘You’re going about this the wrong way. You need sponsors.’”Two decades later the Atlanta Invitational is totally sponsor-supported and has generated almost $1.3 million for Wofford student-athletes through the Terrier Club. The event that once made an annual contribution to the college now supports the Georgia Alumni Endowed Scholarship Fund, established in 2011 in memory of Sessoms and King.

“Ed Wile is right. It’s all about engagement,” says Carpenter. “Walt Sessoms and Russell King were the nucleus of this Wofford-Atlanta community. They engaged so many people and did so much good. It’s a tremendous privilege to be a part of this community and to honor them.”

This year’s tournament, at Hamilton Mill Golf Club, drew regulars like Bie Sunderland ’76, who this year brought his triplets (Nikki, Trip and Dara) to make a family foursome; Taiwanna Billups ’97, who has helped organize the event for the past six years and was playing in it for the first time; a group of regulars from AT&T that includes Fred Pearson ’74, one of the first African-Americans to play basketball at Wofford; longtime Atlanta Braves catcher Bruce Benedict, who was the guest of Bernie Gallagher ’67; and PGA Tour Professional William McGirt ’01, fresh off his FedEx championship performance at Eastlake Country Club.

“Russell and Walt were both devoted to Wofford, and baseball was in their blood,” says Kathy King, Russell’s widow. “They were on the board when baseball had to leave campus because of field regulations. It bugged him until the college brought baseball back.”

Kathy King enjoys attending the tournament each year. Wearing her Wofford gold and black, she catches up with tournament faithfuls and talks with Wofford baseball coaches and former players about the program.

“It’s rare that I go through old family items without finding something that has to do with Wofford or baseball,” says King. “I know I speak for Harriett (Sessoms) when I say how much it means to us to share who Russell and Walt were with the people now playing in the tournament. We were very touched when they honored them with the baseball scholarship and still are.”

Russell’s grandson, Ryan King of Charlotte, N.C., played in the tournament for the first time this year. According to Kathy, who became a baseball fan after she married Russell, the family connection now extends to another generation. Ryan’s first-grade son, Cameron, Russell’s great-grandson, loves Wofford baseball and has had the opportunity to round the bases at Russell C. King Field. “It means a lot to have that family connection,” she says.

Like Wile, Frank Herndon ’80 has been a tournament organizer since the beginning. Although he was the first volunteer and player to arrive at the course the morning of the tournament, he says that the tournament practically runs itself.

“Under Ed’s leadership it’s almost on autopilot,” says Herndon, director of business development for CIBER, a software services company in Atlanta. “We’ve got a group that cares about Wofford and wants to make things happen. Establishing an endowment with the tournament proceeds made it personal.”

The tournament, Wofford-Atlanta community and level of support generated for the college have grown because of that. Just ask Kathleen Bazaz ’11.

“Ed Wile gave me an internship with UBS right after graduation. It helped me get my feet wet in the industry,” she says. “One day Ed says, ‘Wofford alumni in Atlanta host this golf tournament …’ I’d never played golf, but I’m good at organizing, and I appreciated the opportunities that Ed had given me, so I volunteered to help.”

Wile likes to think so too. For him it’s about reaching back and engaging the next generation, much like Sessoms did for him, much like he’s done for Bazaz and others.

“Like Walt, many of us could not have attended Wofford without scholarship support,” says Wile. “Someone in the Wofford community made a sacrificial gift to support our education. Now it’s our turn to pay it forward.”

For more information about the Atlanta Invitational and other golf tournaments that support Wofford, visit wofford.edu/terrierclub.