Teacher education students prepare at Wofford to train the next generation. 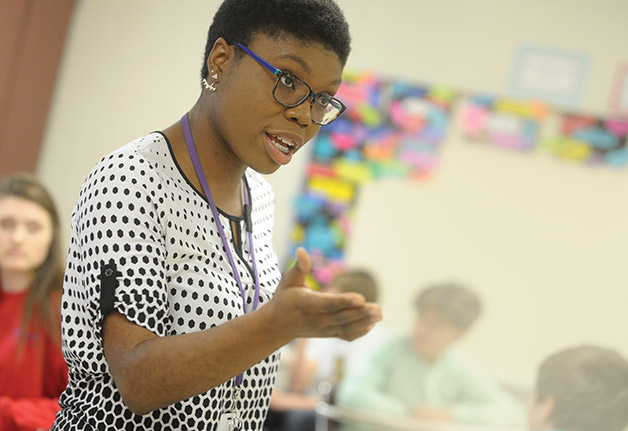 For Amanda Greene ’16, preparing to teach means overpreparing. On Oct. 18, she began her first eighth-grade Spanish class of the day at Florence Chapel Middle School with a discussion of homework and vocabulary words that students found difficult. “Señorita Greene” and her clase (class) played charadas (charades) using their vocabulary words and Skyped Chris, a university student and Greene’s Spanish tutor in Chile. Greene’s students asked Chris questions in Spanish. He answered in turn, and Greene jumped into the role of translator.

Greene filled every minute of the class period, and she could have taught more if necessary.

“Christie Johnson ’95, one of my education professors at Wofford, always says to over-plan. There’s nothing wrong with over-planning because if students find out you’ve run out of things to do, that’s when classroom management falls apart,” says Greene.

Planning. Practicing. Preparing. According to Greene, who’s navigating her first year as a teacher but already talks and acts like a veteran, Wofford’s Teacher Education Program helps students with all three.

“The Teacher Education Program at Wofford is demanding, and the time commitment can be stressful, but it prepared me for what teaching is now. I’m not too surprised by what I see.” Greene says that the most important part of the Teacher Education Program is the semester of student teaching. “It’s the hardest thing I’ve ever done,” she says. “On one hand I was the teacher, but on the other hand I was still a student.”

According to Johnson, students must complete 45 semester hours of coursework before being admitted to the Teacher Education Program. Teacher education candidates then complete three different field experiences: 10-, 15- and 100-hour clinicals, preferably in a rural, urban and suburban school setting. Their final field experience is the semester of student teaching during their senior year. Teacher education candidates also are required to pass three standardized tests: Praxis I, Praxis II and the PLT.

“I tell them it’s a full-time job with no pay, but good educators commit,” says Johnson, who came to Wofford to become a public school teacher and is a product of the Teacher Education Program.

Wofford will graduate three teacher education students in the spring. One of those students is Madison Jones ’17, an English major from Charleston, S.C. Jones decided her sophomore year to teach, partly because of the influence of past teachers. She believes, “good teachers are consistent and mentor as well as teach content in a way that makes students want to learn.”

Jones and her classmates in the Education 420: Instructional Methods class are eager to begin their 100-hour senior field experience because it gets them one step closer to student teaching.

“I’m excited,” says Holly Reynolds ’17, a mathematics major from Fort Mill, S.C. “We’re finally going to get to put into use all that we’ve learned for the past three or four years.”

Reynolds excels at math and because of that always has found herself tutoring her peers. She wants to reassure and encourage those intimidated by the subject.

“When I tell people I’m going to be a math teacher, I get a lot of ‘God bless yous,’” says Reynolds. “I’m on a mission to help those who say, ‘I’m horrible at math’ or ‘I never get math.’ If I can make even one student who hates math love it, I’ll have done a good day’s work.”

McKensie Rogers ’16, in her first year as a Spanish teacher at Byrnes High School in Duncan, S.C., understands. She decided to pursue teacher education at Wofford because of the way teaching is both about academics and personal relationships. She says valuing and considering the different learning styles of her first- and second-year Spanish students is her biggest challenge.

“While I want to value their different learning styles, personalities and strengths, I have 21 to 29 students in each class, and that’s a lot of differences to consider while teaching,” she says. Her biggest reward is being a part of the growth and development of her students. “They’re young and starting to figure out life; being invited into that process is really humbling. I love seeing their academic progress, absolutely, and I love that teaching allows me to do that and at the same time see them develop as people.”

Abby Umberger ’17, an English major from Dawsonville, Ga., is looking forward to a traditional high school experience. She was home-schooled and then went to a small, private school before coming to Wofford.
“I feel prepared by the Wofford Teacher Education Program, so I’m ready to get started,” she says. “I’m excited to have an influence on students during a really formative time, and I’m looking forward to digging deep into my content. I want to teach higher-level thinking and watch as others develop an enthusiasm for something I’m passionate about.”

For Jones, Reynolds and Umberger, the reality that they soon will be teachers instead of students is sinking in. They will finish their last semester of coursework at Wofford in the fall and will take their final, final exams in December. They all believe in public education, and they all love students. They’re prepared, and the first-year teachers who were sitting in their seats a year ago are proof.

Taylor Till ’16 comes from a family of teachers, and although she tried to ignore the calling, she’s now happily teaching 10th grade U.S. government and civics at Chapman High School in Inman, S.C. She’s also the head cheerleading coach.

“All of the classes in the Wofford Teacher Education Program prepared me to teach in a classroom,” says Till. “They taught me about the education system, strategies to implement in the classroom and different educational philosophies, but the most valuable tool the program gave me was the classroom experience.”

She acknowledges that transitioning from student to teacher was hard, but she never felt unprepared. “Dr. Ed Welchel, chairman of the college’s Teacher Education Program, was always real with us about teaching, but he also was real with us about how rewarding the profession is. I’ll always be grateful for his wise guidance.”
Rob Taylor ’16 teaches economics, government and history at Byrnes High School.

“I feel 100 percent prepared to deal with the challenges and obstacles I face on a daily basis because of the instruction and opportunity I received from Wofford’s Teacher Education Program,” says Taylor. “I had a moment in college where I realized teachers do, in fact, make the difference in people’s lives, and the field of education is one of the most vital to our country.”