College celebrates construction crews and community impact of the building. 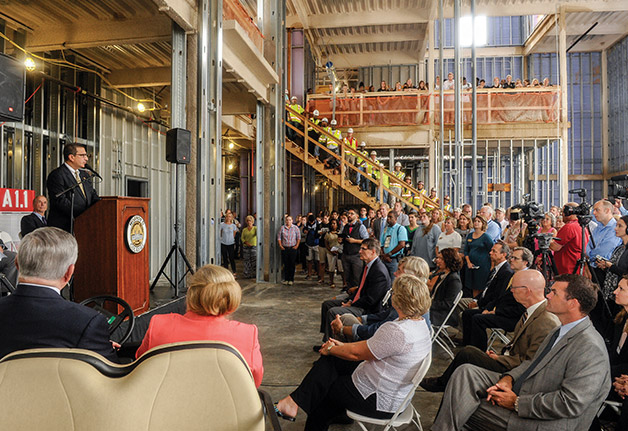 On Sept. 27, 2016, Wofford College celebrated the topping out of the Jerry Richardson Indoor Stadium at the construction site, ceremonially marking the laying of the highest point beam of the construction building and acknowledging the work of construction crews for the project. The building is , slated to open in the fall of 2017.

Members of the Robins & Morton construction crews, along with Wofford students, faculty and staff, signed a ceremonial steel beam that had been signed by Jerry Richardson, owner/founder of the Carolina Panthers, a 1959 Wofford College graduate and a member of Wofford’s board of trustees, who provided the funding for the building. The beam will be on display in the new building once it is completed.

The event comes two weeks after the topping out of the Rosalind Sallenger Richardson Center for the Arts, set to open in the spring, also a gift from Richardson and named in honor of his wife.

“It’s hard to believe that two years ago at this time, we didn’t even know that Wofford College would soon be home to a new center for the arts and a new indoor stadium,” President Nayef Samhat told the crowd, standing inside what will be the lobby of the basketball arena. “Thanks to the vision, dedication and generosity of Mr. and Mrs. Jerry Richardson and the unwavering support of his wife, , however, we have both, and generations of Wofford students will learn, practice, grow, compete, create, perform and cheer in ways that are both inherently Wofford and unique to the opportunities generated by these new buildings.”

The Jerry Richardson Indoor Stadium will serve as the home for women’s basketball, men’s basketball and volleyball. The facility will have a seating capacity for non-athletics functions, such as commencement and concerts, of 4,500.

“Each beam, riser and rafter stand around us in tribute to the skilled construction crews who have worked on this project,” Samhat continued. “Today, we celebrate them and the impact that this building is already having on our community.”

Richard Johnson, director of athletics, recalled his days as Wofford’s basketball coach, when “we didn’t even have the parquet floor in the Benjamin Johnson Arena. … Now, we’re about to have a new indoor stadium that will arguably be one of the finest in the country. Our basketball and volleyball teams will both have the practice and competition spaces that they need, and the fan experience will be second to none. The Jerry Richardson Indoor Stadium will have an undeniable impact on the fabric of Wofford College.

“College athletics brings a lot of value to the student experience,” Johnson continued. “It increases national exposure and name recognition. It boosts admission applications, which plays a role in selectivity and increased national rankings. It generates revenues and jobs.”

Johnson outlined the community impact of the Robins & Morton construction crews and the project, including 700 total construction workers earning paychecks, with 70 percent coming from Spartanburg and Greenville, “which means they are adding to our community’s tax base, buying their food in local grocery stores and eating in local restaurants. They work here, live here and most certainly will be cheering on the Terriers here very soon.”

He added that 80 percent of the subcontractors on the project are from South Carolina or North Carolina. “That’s pretty appropriate considering the Panthers’ ‘Two States, One Team’ hashtag. This is just one more example of the Richardsons’ commitment to supporting local families and local economies.”

Cam Jackson, a junior member of the men’s basketball team from Winchester, Va., recalled that at the groundbreaking for the building he presented Richardson with a seat on the Wofford men’s basketball bench. “It was definitely a highlight of my Wofford experience,” he said. “Mr. Richardson, we’re still glad you’re on our team, and that offer stands. I can’t think of a bigger game changer than having your support. Thank you for your game-changing support and this game-changing stadium!.”

Jackson, praising the construction team, added, “On behalf of all Wofford students who will enjoy this building, we thank you for going the extra mile to ensure that the Jerry Richardson Indoor Stadium has the integrity of the name it bears. We’re cheering for you as you complete this building, and we thank you for the work done so far.”