Updates from Wofford alumni – click “Submit News” in the Quick Links menu to submit your news to be considered for the next issues of Wofford Today. 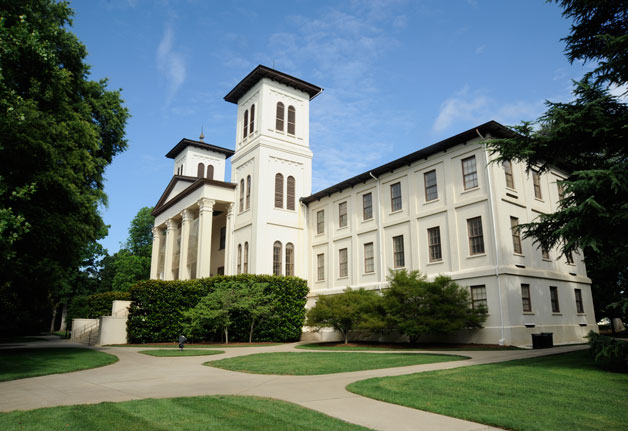 In September the National Newspaper Association awarded Bill Kinney Jr. the James O. Amos Award for his lifetime commitment to community journalism. Kinney is the editor and publisher emeritus of the Marlboro Herald-Advocate.

J. Harold Chandler has been elected chairman, president and CEO of Milliken & Co. Chandler has served on Milliken’s board of directors for 14 years, the past five as chairman. In May he completed 24 years of service on the Wofford Board of Trustees. The boardroom in the DuPré Administration Building was named in his honor for his service, including five years as chairman. Chandler says his first step at Milliken will be “to ensure an effective transition and to maintain the positive momentum from which the company is currently benefiting.

David N. Anderson of Columbia, S.C., has joined Greenville-based GrandSouth Bank as senior vice president and market president in Richland and Lexington counties, leading the bank’s entry into the Midlands. Anderson is a veteran banker with 38 years of experience.

Max L. “Rocky” Cummings Jr. has joined Moore Beauston & Woodham as senior manager and director of the accounting and assurance department in its West Columbia office. Cummings has more than 30 years of certified accounting experience in a wide array of industries.

Renee Farmer Foxworth is a pediatric nurse practitioner with the Rollins School of Public Health at Emory University in Atlanta. She lives in Lithonia, Ga., with her husband, Nathaniel Ezekiel Foxworth ’80.

In February, Mark Bundy passed his FCC General Class test for amateur radio. As an active “ham” operator, he is using his license to learn emergency communications. Bundy operates with the call sign W4UTX. He also is active with the American Radio Relay League’s National Parks on the Air program, including activations at the Martin Luther King Jr. National Historical Site and the Chattahoochee River National Recreation Area.

Beth Stacy Pitts is an attorney with Denney Pease Kirk and Morgan in Columbus, Ga., where she lives with her husband and three children.

Anthony Leigh has earned a master’s degree in philanthropy and development from Saint Mary’s University of Minnesota. He serves as senior vice president for institutional development at Huntingdon College in Montgomery, Ala. He also serves as chairman of the board of stewards at Frazer Memorial United Methodist Church and chairman of the advisory board of Baptist East Medical Center. He is a member of the board of directors of the Business Council of Alabama and the Montgomery Rotary Club Foundation.

A senior manager in the Charleston, S.C., office, Sarah Windham has been named a partner at Dixon Hughes Goodman. Windham is a certified public accountant.

Jonathan Flack has been appointed family business services leader for PricewaterhouseCoopers US. As the leader of PwC’s Family Business Practice, he spearheads the strategy, operations, talent development, thought-leadership and marketing for the sector.

The Aiken Center for the Arts recently featured the works of Leigh Hyman Ryan as part of an all-women’s artist collection. For more information about Ryan and to view her latest work, visit leighryangalleries.com.

Dr. David J. Fallaw is the chief medical information officer at Augusta University’s Medical College of Georgia. He provides leadership and direction for the development and implementation of the clinic system strategic technology plan for the organization, while ensuring safety, quality and efficiency of patient care through the use of clinical technology solutions and evidence-based medical best practices. In addition, he acts as associate program director for the college’s Internal Medicine Residency Program and directs a course for internal medicine and family medicine residents. He received the MCG Exemplary Teaching Award for Residence Education in 2013 and 2015.

Adam and Stacey Williamson Perrow welcomed two future Wofford Terriers with the birth of Virginia Belle Perrow and Hugh Holman Perrow, born June 12, 2016. According to their parents, the twins are looking forward to their first home football game.

Claude T. Prevost III is a shareholder at Collins and Lacy, practicing in construction, professional liability and premises liability. He was named a South Carolina Super Lawyers Rising Star and was voted “Best and Brightest – 35 and Under” for Columbia Business Monthly’s inaugural listing. Prevost is president of the Young Lawyers Division of the South Carolina Defense Trial Attorneys Association. He lives in Columbia with his wife, Ann Mac, and children, Townsend and Layne.

Now living in Greer, S.C., Laura Green and Nick Schomisch were married on Oct. 17, 2015, in Greenville, S.C. Laura works for Metlife in Greenville, and Nick works for PricewaterhouseCoopers in Spartanburg. Dr. Lindsay Grosso was a bridesmaid.

Alex Fridzon is the chief financial officer and co-owner of AD 1 Global in Hollywood, Fla., where he lives with his wife, Katie, and two children, Abigail (4) and Nathaniel (2).

Continuing her career in education, Tanya George Marshall was recently hired as the first African-American female to teach elementary school with Westminster Schools of Augusta in Georgia. She earned her M.Ed. from Columbia International University in December 2015.

Marion Smith, a civil-society leader, expert in international affairs and executive director of the Victims of Communism Memorial Foundation, spoke at Wofford on Oct. 25. Smith holds a master’s degree in international relations from Central European University, and his articles have appeared in USA Today, The Hill, The Washington Post and The Wall Street Journal.

Mary Beth Broadwater and Alexander Kollert were married on Sept. 3, 2016, in Salzburg, Austria, where they now reside. Mary Beth is the national campus director of Agape Austria at the University of Salzburg.

Living in Pasadena, Calif., Dr. Achini Bandara and Joshua Wiley were married on Oct. 15, 2016. The ceremony was held in Lexington, S.C. Achini and Josh met at Purdue University. She is a research administrator for the University of Southern California, and he is a technologist with NASA’s Jet Propulsion Laboratories.

Mary Frances Dassel Cole is a magistrate judge in Anderson, S.C. A graduate of the University of Virginia School of Law, Cole previously worked as an attorney in private practice and as a Spartanburg County public defender. She and her husband, the Rev. Lee Cole, live in Williamston.

Preston Willard and Charlotte Manigault McElveen, both of Columbia, were married on Sept. 30. He is chief operation officer of Palmetto Garage Works, and she is a human resources assistant with JH Development.

After graduating with a master of medical sciences degree in physician assistant studies from Mercer University, Alexandra Rogers James accepted a position as a physician assistant at OrthoNOW in Savannah, Ga. She and William James were married on July 16, 2016. William received a master of healthcare administration degree in 2013 from the University of South Carolina and is now a financial oncology analyst with the Nancy N. and J.C. Lewis Cancer and Research Pavilion at St. Joseph’s.

Patterson Maker Miller is the operations manager for Mana Nutrition in Matthews, N.C. She and her husband, Graham Strowd Miller, were married on Aug. 20, 2016. They live in Charlotte.

Lisle Traywick has joined Sowell Gray Stepp & Laffitte as an associate in its Columbia, S.C. office. Prior to joining the firm, Traywick served as clerk to the Hon. H. Bruce Williams at the South Carolina Court of Appeals and the Hon. David C. Norton at the United States District Court for the District of South Carolina.

Living in Orlando, Fla., ReAnne Satterlee Hinton and Tyler Newsom were married on June 17, 2016. ReAnne is pursuing a master of arts degree in forensic and legal psychology at Marymount University.

Caesars Head Capital has announced the appointment of McFadyen Anderson as managing director. The position brings Anderson back to his hometown of Greenville, S.C., after working in real estate investment and banking in Jacksonville, Fla.

This fall Lauren Dunbar has been competing for a spot on the LPGA Tour. She finished 65th overall in the first stage and has qualified for 2017 Symetra Tour status. Cathy and Pat Crowley ’73, a member of the 1970 Wofford NAIA National Championship golf team, have taken Dunbar under their wing. Crowley has caddied for Dunbar during the qualifying rounds and serves as her coach while she practices at the Country Club of Spartanburg.

Lauren Elizabeth Williamson received her master’s degree in professional accountancy from Clemson University. She has accepted a position at Elliott Davis Decosimo, in Columbia, S.C., as a tax accountant.

Annamaria Hidalgo accepted a position as an admissions counselor at Spartanburg Methodist College.

Yukun Peng Drew is enjoying graduate school in the Entertainment Arts Engineering program at the University of Utah. The program was recently featured on National Video Game Day by FOX News as the top program in the country for video game design.