A rich and long tradition 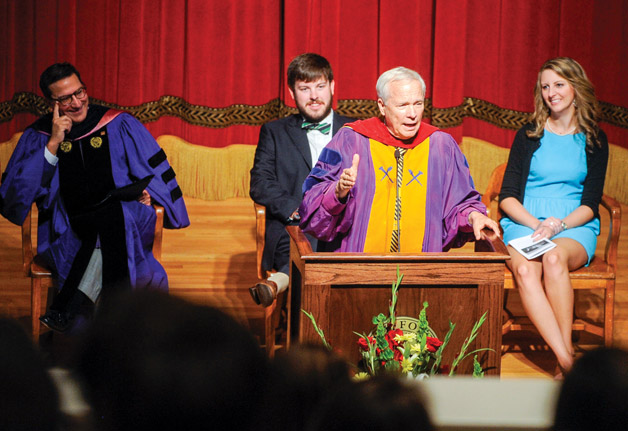 During his eight years as bishop of the North Alabama Conference, Bishop William H. Willimon ’68 became increasingly aware of the burden of debt that the men and women he was ordaining into the ministry were carrying. He decided that he needed to do something to help. With his wife, Patricia, he established the William H. Willimon ’71 M.Div. and Patricia Parker Willimon Scholarship Fund at Yale’s Divinity School. In a nod to his undergraduate alma mater, Willimon asked to give first preference for the fund to Wofford students in need of financial aid.

“There is a long tradition of Wofford graduates coming to YDS,” says Willimon, who established the Willimon Family Endowed Scholarship at Wofford in 2011. “Mine is directly tied to Dr. John Bullard, who was head of the Religion Department at Wofford when I was there. It was rumored at Wofford that if you were an A student, Dr. Bullard would not write a recommendation for you to anywhere else. I found that to be true. When I suggested that I apply to more than one graduate program, he simply told me he was a very busy person and would not write a recommendation for anywhere else. ‘You will thrive there,’ he told me.”

Willimon acquiesced. After graduating from Wofford, the Greenville, S.C., native enrolled at Yale Divinity School, completing his master of divinity degree. His ministry took him to a number of South Carolina Methodist congregations, and then to Duke University, where he was dean of the chapel and professor of Christian ministry until his election as a United Methodist bishop in 2004. He served eight years as the bishop of the North Alabama Conference before retiring and returning to Duke in 2012.

Jim Hackney ’77 holds a master of arts in religion from Yale and currently serves as senior director of development at Yale Divinity School. He shared the good news of Willimon’s gift with Wofford.

“Will, as a Wofford trustee and a member of the dean’s advisory council of YDS, wanted to figure out a way for this to benefit both places,” says Hackney, who explains that Yale requires every scholarship indenture to be approved by the provost. Preferences or special conditions, such as those in the Willimon scholarship, are carefully scrutinized. For that reason, YDS has very few scholarships with a preference for other colleges. “The fact that we were able to get this through reflects well on Wofford, for Wofford students who came here have done so well.”

According to Hackney, it doesn’t hurt to have Jerry Henry ’75 (YDS master of divinity), who serves on the YDS dean’s advisory council, as a friend as well. Henry is on the board of the Association of Yale Alumni (representing 150,000 Yale alumni worldwide) and chairs the graduate and professional school’s alumni.

“Pre-ministerial students often acted like there was no place to go to seminary outside of the South,” explains Dr. John M. Bullard, Albert C. Outler Professor of Religion, emeritus, who chaired Wofford’s Department of Religion from 1961 to 2001. Bullard regularly encouraged his best students to consider Yale, where he had earned his seminary and doctoral degrees. He believed that attending a divinity school such as Yale would help broaden students’ horizons. “Unlike at denominational seminaries, students at Yale rubbed shoulders with students from many different denominations, and from all over the world,” says Bullard.

For similar reasons, Dr. Charles F. Nesbitt ’22, who was chair of the Wofford Department of Religion before Bullard, also encouraged students to consider Yale or the University of Chicago, which was his alma mater.

During a Yale alumni reunion a number of years ago, Bullard says that a divinity school professor confided in him that his colleagues considered Wofford one of their primary feeder schools. In traveling from Wofford to Yale in 1968, Willimon was following a well-established trail. One of the first to make that trek was Dr. Albert C. Outler ’28, who earned his Ph.D. from YDS in 1938. Outler had a distinguished career as a professor, first at Duke, then at Yale and finally at Southern Methodist University. He was one of the foremost Methodist theologians and experts in the life and theology of John Wesley, and he is credited with coining the term “Wesleyan Quadrilateral” to describe the basis of Wesley’s theology — the reliance on scripture, reason, church tradition and personal experience in reaching theological conclusions. An endowed chair in religion at Wofford honors Outler’s memory.

Since Outler, at least 27 Wofford graduates have earned degrees from YDS. Those Wofford and YDS alumni have held numerous influential pulpits and professorships at many leading colleges and universities. Dr. A.K. Anderson ’90, now the chair of Wofford’s Department of Religion, decided to pursue his M.Div. at Yale, a choice he attributes to the influence of Dr. William W. Mount, another Yale graduate who held the Outler professorship at Wofford.

Anderson also cites Yale’s strong tradition of teaching in biblical studies, theology and worship, and especially notes the influence of three YDS faculty members: Robert Johnson, George Lindbeck and Brevard Childs. Those three were part of the YDS approach to interpreting religious texts and traditions. In the years since Anderson studied at Yale, the faculty has become more diverse in terms of the fields they teach.

“Now their studies are much more global,” Anderson explains. “Students who are studying there now are getting introduced to Christianity in a full-bodied form, not just limited to one part of the world. As an alum, I have been thrilled with the direction they’ve gone in.”

Three recent Wofford graduates, Mesha Arant ’12, James Ballard ’12 and Will Prosser ’10, have earned degrees at Yale. Prosser, a sales executive for UPS, chose Yale on the advice of Dr. Byron McCane, then the Outler professor and chair of Wofford’s Department of Religion.

“Wofford, especially the religion department, prepared me well for the rigors of Yale,” Prosser recalls. “In fact, I noticed a distinct difference between those who went to smaller liberal arts colleges and large universities. Whenever a class asked for a comparison or synthesis of materials, I would just look around and ask, ‘Okay ... and? That’s it? What else do you want?’ Because, of course, I had been asked to do similar things in every class at Wofford. Meanwhile, some of the students from large universities weren’t sure of what was being asked of them.”

In a way that Bullard predicted, Prosser found that both Wofford and Yale prepared him “for asking the difficult questions, for being able to adapt to unfamiliar and difficult situations. People ask me all the time how I use my religious education in my job, and I tell them I use it every day. Both taught me how to learn, and in this business, it’s all about two questions: What can you learn, and how fast can you learn it? I can positively answer both because of Wofford and YDS.”

Future Wofford students can be grateful to Willimon for helping make that same experience possible for them.

The William H. Willimon ’71 M.Div. and Patricia Parker Willimon Scholarship Fund at Yale Divinity School was designed in part to encourage top students from Wofford to consider Yale with the incentive of tuition assistance. This is the next step in the Wofford-YDS connection that began in 1928, when Albert Outler graduated from Wofford and enrolled at Yale. Below is a list of Wofford-YDS graduates who were influenced by Wofford faculty such as Dr. John Bullard, Dean Jerry Cogdell, Dr. Larry McGehee, Dr. Bill Mount and Dr. Celeste Zdanski. Dr. A.K. Anderson, chair of the Department of Religion at Wofford, and others encourage students today to consider the tradition as well.

Wofford alumni who have attended YDS since Outler:

Al Tisdale ’75 was the associate dean and director of Anglican Studies and Formation at Berkeley Divinity School (Episcopal arm) at Yale for many years. His wife, Nora Tubbs Tisdale, is professor of Homiletics at YDS.

Are there others?
If you or someone you know should be on this list, please email woffordtoday@wofford.edu.