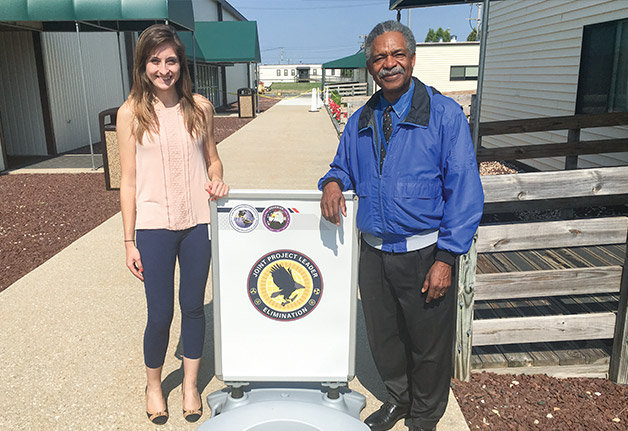 A 63-year-old man who works as a chemical engineer and a 26-year-old woman who works as a writer and editor may not have much in common, but Leonard Rowe ’75 and Lisa Morris ’12 discovered a surprising connection at a colleague’s goodbye luncheon.

Sitting at a table with Rowe and several others on a military base in Maryland, Morris told a story about her one and only camping experience. She explained that the camping experience in the Peruvian Amazon was a part of Interim, a January term that focused on experiential learning, internships and study abroad opportunities offered by the liberal arts college she attended.

“Where did you go to school?” Rowe asked.

Rowe and Morris enjoyed a homecoming of sorts in Maryland, sharing tales of Wofford and the similarities and differences in their experiences, which were 41 years apart.

A South Carolina native, Rowe was recruited to work at Aberdeen Proving Ground in Maryland after studying chemistry at Wofford, physical chemistry at the University of North Carolina and chemical engineering at Vanderbilt University. He now works with the Joint Project Leader for Elimination, an element of the Joint Project Manager Guardian, Joint Program Executive Office for Chemical and Biological Defense. The government organization is responsible for delivering material solutions to defend against the world’s chemical and biological threats.
Morris supports JPL-E as a client with the award-winning advertising and public relations agency, A. Bright Idea. With her degree in English and Spanish, she never imagined she would one day know so much about chemical weapons.