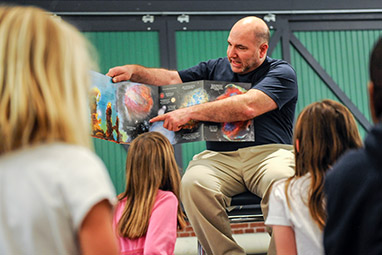 Steve Zides reads to elementary school children in the Children's Reading Room at the Spartanburg County Public Libraries. It is one of the outreach programs in which he and his Wofford physics students participate.
2018-04-13

SPARTANBURG, S.C. – You are as likely to see Steven B. Zides reading to elementary school children at the public library or hanging out with superheroes as you are to see him in front of a classroom teaching physics to Wofford College students.

Zides, who has taught physics at Wofford for nearly 20 years, has been immersed in interdisciplinary learning communities at Wofford, co-teaching with colleagues from the departments of English, philosophy and theatre, and in the significant outreach components these courses provide with the Boys & Girls Club of Greater Spartanburg and the Children’s Reading Room of the Spartanburg County Public Libraries.

Zides was recognized April 12 with the 2018 Excellence in Teaching Award, presented by the South Carolina Independent Colleges and Universities (SCICU), honoring his effective leadership and mentorship inside and outside of the classroom. Each year, SCICU honors the “best of the best” among the faculty at its 20 member colleges and universities. Honorees receive a $3,000 professional development award and are recognized at an awards dinner in Columbia, S.C.

“Steve Zides has been one of Wofford’s most gifted teachers, and I admire him for the way he continues to embrace the ideals of a liberal arts education by incorporating physics with a multitude of humanities and other courses to create enticing and interesting opportunities for Wofford students,” says Dr. Michael J. Sosulski, provost. “His abilities to work across disciplines with colleagues and to mentor his students as well as youngsters in the local community are important and enviable skills. This is a well-deserved honor for Steve, and it reflects the respect and appreciation we all have for him.” “The real goal of the liberal arts is to recognize that every subject, every discipline has its own brand of truth,” Zides says. “This means that all disciplines are seeking the same thing from different directions. If you put two disciplines together, as we do in interdisciplinary learning communities at Wofford, it’s fascinating exploring both.”

Zides was a co-principal investigator on Wofford’s 2002 National Science Foundation grant “Seeing the Big Picture: Linking the Sciences and the Humanities,” which brought interdisciplinary learning communities to the college. He co-taught “Cosmology and the Ultimate Questions” and “A World on the Edge,” exploring the nature of potential global catastrophes, with the Department of Philosophy; “Science and Science Fiction” with the Department of English; and “Theatre Physics” with the Department of Theatre.

Since the completion of the NSF grant, Zides has continued to create new interdisciplinary physics courses for non-science majors, such as “Physical Aesthetics,” incorporating art history; “The Physics of Superheroes,” pulling from comic book pop culture; and “Physics-Lit.,” combining with English literature.

“I am currently on a professional development leave in which I am creating interdisciplinary modules that may become a book,” Zides says. “It’s fascinating to combine philosophy, art history and other disciplines with physics. All of this also allows for our outreach programs, such as the Superheroes program – which we’ve done six semesters and will do again – and reading about astrophysics at the Children’s Reading Room at the library. Our Wofford students read astronomy books to the children, and then we have an ‘astronomy day’ in which we launch foam rockets and build sand/glitter nebulas.”

Zides introduced a course in astrophysics last year, saying the department wants to add new, dynamic courses on a regular basis. “A lot of physics majors would like to take astronomy, so astrophysics allows them to apply all their physics knowledge in an astronomy setting to see how the universe works. Astronomy usually is about the facts of the universe. Astrophysics is about how and why it works. It’s a nice combination.”

Adding new, interesting courses and interdisciplinary opportunities give physic majors “something out of the ordinary” and makes the department more dynamic and attractive to students who want to minor in physics, Zides says. A physics minor was added to the curriculum in 2017.

The next new course the physics department will introduce is an interdisciplinary look at energy, physics and the environment, taught by Dr. Carolyn M. Martsberger, assistant professor of physics. “It will be very popular,” Zides predicts.

Zides plans to work on other interdisciplinary courses in the future as well as run the Imagine Science Films: The Wofford Tour film festival, which has been held twice at Wofford. “The films are an interdisciplinary lens that looks at science and science themes from a humanistic standpoint,” he says. “The films come from a group in New York City, The Imagine Science Films group, which solicits such films from all over the world and which works with Wofford to create just the right program.”

He also has presented at a variety of conferences about these interdisciplinary projects, including Mathematical Association of America Mathfest, Science Education for New Civic Engagement and Responsibility (SENCER) of the National Center for Science and Civic Engagement, the Association of Interdisciplinary Studies, the Society of Literature Science and the Arts and the College Art Association. He recently published an article, “Physical Aesthetics: An Introductory Physics Course Through Metaphor,” in the Conference Proceeding Section of the MIT Journal Leonardo.