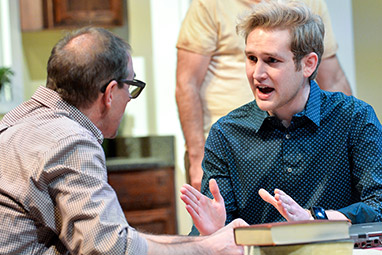 SPARTANBURG, S.C. - Wofford Theatre's upcoming production of "True West" is as much a tribute to the playwright, the late Sam Shepard, as it is a valuable educational experience for students.

"True West," opening Wednesday, Feb. 28, is the inaugural professional production in the Sallenger Sisters Black Box Theatre in the Rosalind Sallenger Richardson Center for the Arts. Performances will be held at 8 nightly through Saturday, March 3, with a 2 p.m. matinee on Saturday as well.

The play also will be Wofford's inaugural faculty showcase, starring Dr. Mark Ferguson, the Department of Theatre's chairman and director of Wofford Theatre, and Daniel Day, assistant professor of theatre. Daniel Murray, department chair of acting/movement at the South Carolina Governor's School for the Arts and Humanities, is directing the production, which will feature student theatre majors as actors and crew.

"True West" is an intimate exploration of sibling rivalry and familial discord in the suburbs of Los Angeles. Turmoil bubbles just below the surface for brothers Austin and Lee as their aspirations clash and collide during a fateful weekend that will change their lives irrevocably. As lofty hopes turn to crushing blows, Austin and Lee ask themselves, is it possible to cling to an ideal of justice when the call of the lawless desert becomes impossible to resist? "This faculty showcase was conceived to fulfill two objectives," Ferguson says. "The first was to acknowledge the loss of one of our most important American playwrights this past summer - Sam Shepard - by celebrating his work. The other is bound up with the mission of the theatre department to constantly improve the student learning experience through whatever means possible."

Ferguson says he and Day were closer to the ages of the characters of Austin and Lee as Shepard wrote them when Day first suggested, shortly after he arrived at Wofford in 2010, that the play would be "a good fit for us." "It was less about our ages and genders than that 'True West' nailed the bullseye of our departmental mission to produce works that ask exciting and troubling questions about the nature and purpose of human existence," Ferguson adds. "It just took eight years - and the playwright's death - for the pieces to fall into place."

"The idea was that Dan and Mark, who also have a kind of simpatico born of hard work and mutual passions, would embody Lee and Austin, and Wofford Theatre students would be elemental to the cast and production team, learning the old-fashioned way through apprenticeship to masters of the craft," Murray adds.

"Our aims are simple, but not easy," he says. "We are responsible for giving voice and soul to these characters. We embrace their fears and shortcomings and madness and absurdity, never commenting on them or judging them, but rather revealing them … and ourselves through them. We trust that they have something to say to us about us all as kin, as strivers and Americans in our own particular place and time. We will entertain the audience through storytelling on one level, and reflect and perhaps disturb them on another. This is our job, because it's Shepard's forte."

Murray says at the heart of the entire production is "a deep respect and fascination with Sam Shepard's play. We want to give ourselves over to doing it artistic justice. We ourselves are forming the kind of bond in rehearsals that you only experience when you take on difficult tasks, when you do a little suffering together and truly collaborate. This bond is at the heart of acting and theatre, and is its own kind of reward - the feeling of being more fully alive, connected and in service of something great. We revel in this chance to bring Sam Shepard's work to the Wofford community."

Students are in key positions in the professional-level production, Ferguson adds. "Stage management, the design and production team, the run crew and the cast are populated with current theatre majors, all of whom are getting the intense 'front row' experience of working on a show like this one. Beyond that, all of the students in the department, and at the college, will have a chance to witness two of their professors, who regularly ask so much of them on stage and in the classroom, 'put their money where their mouths are,' so to speak."

Sam Shepard, an actor and Pulitzer Prize-winning playwright, died in the summer of 2017 at the age of 73; the cause was complications of Lou Gehrig's Disease. The New York Times classified him as "one of the most important and influential writers of his generation, (specializing) in capturing the darker sides of American family life."

Shephard wrote more than 55 plays - his last, "A Particle of Dread," had its premiere in 2014 - acted in more than 50 films and had more than a dozen roles on television. He also was the author of several prose works, including "Cruising Paradise" and the memoir "Motel Chronicles." Though he received critical acclaim almost from the beginning of his career, and his work has been staged throughout the world, he was never a mainstream commercial playwright.