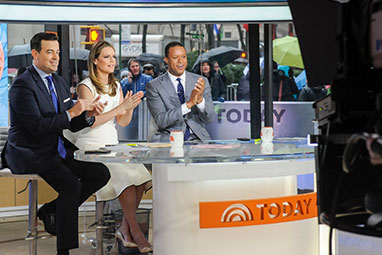 SPARTANBURG, S.C. — The remarkable rise of Craig Melvin, a 2001 Wofford graduate, through the highest levels of television news continues.

Melvin, who studied government at Wofford, has been named weekday news anchor for NBC’s TODAY Show.

A native of Columbia, S.C., Melvin was promoted from a co-anchor spot on Saturday’s TODAY Show. He was a regular on the weekday show but now will be a central figure on one of television’s most popular news programs. Top journalists such as Ann Curry and Natalie Morales previously filled the role.

“So looking forward to being a part of the @todayshow family Monday-Friday,” Melvin posted on Facebook.” Grew up watching the team. Now I’m a part. Being the news anchor on the show means dreams do really come true. #livingproof #blessed See you in the morning.”

Melvin will host the show along with Hoda Kotb and Savannah Guthrie. After the announcement was made on the show Tuesday, Melvin said, “Before we start this whole new thing, I wanted to just thank my parents, who sacrificed so much for me to go to school and get here.”

Melvin won two Emmys while at WIS. He later worked as a news anchor at WRC in Washington, D.C. before moving to New York City to work for parent NBC. He anchored MSNBC Live on weekends.

Across his career, Melvin has covered presidential elections, national political conventions, inauguration ceremonies, Super Bowls and natural disasters. He often shares stories of his time at Wofford and the major influence the college experience had on his career. Melvin serves on Wofford’s Board of Trustees.