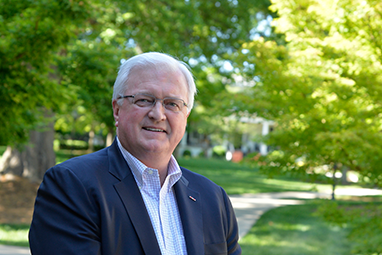 SPARTANBURG, S.C. – Wofford College has added new opportunities to its cache of experiential learning options for students interested in international relations with the establishment of the Hipp Center for National Security and Foreign Policy.

Elements of the Hipp Center, made possible by a gift from Van D. Hipp Jr., a 1982 Wofford College graduate and now chairman of a Washington, D.C.-based international defense consulting firm, include student opportunities for internships in national security and foreign policy and an upcoming exchange program.

“I believe that education is a national security issue,” says Hipp, chairman of American Defense International, a consulting firm specializing in governmental affairs, business development and public relations. “It’s important that young people have a sense of history, what it means to be an American and an understanding of national security and foreign policy.”

Wofford is grateful for Hipp’s generosity in creating the center, President Nayef Samhat says. “Van Hipp’s amazing and seemingly limitless network of connections offer the college community distinctive learning opportunities. We anticipate many transformational educational and experiential learning opportunities for our students as the Hipp Center continues to develop.”

Hipp says many Wofford students have reached out to him over the years, asking for guidance in the national security arena. “I put them in touch with the right people, but I figured if we had a center at the college, we would have the mechanism in place with the right organizations to expose our students to singularly unique experiences.” The center also features a new on-campus ReadyCam studio, giving the college the ability to connect its experts with broadcast networks around the world. According to Hipp, “It is important to share these experts to demonstrate the caliber of professors and leaders at Wofford to a broader audience. Also, the ability to serve as the studio for national and international interviews of non-Wofford newsmakers allows the college to provide a huge service to the news media.”

“Van Hipp has spent a lifetime working to defend America and defeat our enemies,” former Speaker of the U.S. House of Representatives Newt Gingrich says. “This new Hipp Center for National Security and Foreign Policy will help a new generation learn the key lessons that shaped Van’s life.”

In 2011, Hipp founded the Hipp Lecture Series on International Affairs and National Security at Wofford, designed to create ongoing, signature learning opportunities for students. From the 2011 Republican Presidential Candidates Debate to former astronaut Buzz Aldrin to bringing presidential candidates Ben Carson and Donald Trump to campus in 2016, the Hipp Lecture Series has engaged student and faculty participation in history and world affairs since its inception.

Hipp, who was commissioned into the U.S. Army through the ROTC program at Wofford and served on active duty in both Operation Desert Storm and Operation Restore Democracy, has been involved in defense and security matters as well as international policy issues throughout his career. He served as chairman of the South Carolina Republican Party, as a member of the Presidential Electoral College and as a speaker at the 1988 Republican National Convention. In 1990, Hipp became deputy assistant secretary of the Army, serving as the Army secretariat’s “point man” for the successful mobilization and demobilization of the Army’s reserve forces for Operation Desert Shield and Desert Storm. Secretary of Defense Dick Cheney named Hipp principal deputy general counsel of the Navy, and Hipp’s book, “The New Terrorism: How to Fight It and Defeat It,” was published in 2015, with 100 percent of the proceeds going to scholarships for the children of fallen Guardsmen. Hipp is regularly tapped by major news networks as an expert commentator on terrorism.