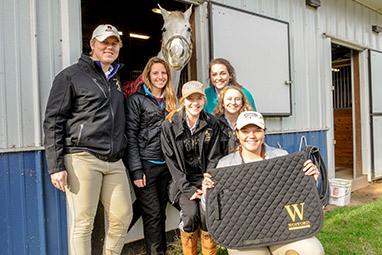 Members of the Wofford equestrian team are enjoying a great season of success.
2018-01-02

SPARTANBURG, S.C. – In only its fifth season, Wofford College’s equestrian team is bringing home some big victories. Competing Nov. 18, 2017, in the Intercollegiate Horse Show Association, the 12-member team beat out larger programs such as Clemson University at the College of Charleston Horse Show.

Allison Andrews, a junior biology major from Wadmalaw Island, S.C., believes the team has the potential to send multiple riders to the post-season regional competition in March; the team has only sent one rider to regionals in the past four seasons. Andrews is co-captain of the team with Rhiannon Lemaster, a junior psychology major from Greer, S.C.

“The whole team has been performing better this season, and the College of Charleston competition showed that,” Andrews says. “As far as overall team standings, that was our best show of the season.”

The team placed seventh overall, beating out Clemson and Georgia Southern University, ranked fourth and third in the region, respectively. Individual riders also received awards within their divisions and classes: Andrews placed fifth in her jumping class; Jordan Holmes, a first-year student from Stockbridge, Ga., won her flat class; Lindsay Goan, a junior computer science major from Chesapeake, Va., and Molly Wells, a first-year student from Asheboro, N.C., placed third and fourth in their flat classes; and Keeley O’Keefe, a sophomore finance and accounting major from Charlotte, N.C., and Betsy Covington, a junior psychology major, with a minor in business, from Clio, S.C., placed fourth and sixth, respectively, in their walk-trot class.

Within the IHSA system, there are six divisions, with a flat class and a jumping class. Each rider is randomly assigned a horse upon arriving at the competition and is not given the opportunity to warm up on the horse, going in only with written information on how the horse rides.

“Judging is based solely on the rider and his or her abilities, rather than the quality or the behavior of the horse,” Andrews says. “The system used is fair and creates a level playing field.”

Within each division and class competition, riders can earn individual points, which go toward the team’s overall show placement, but individual riders can accumulate points across the different shows to qualify for regionals.

“We’re getting some of our riders back from abroad next semester,” Andrews says. “To this point, we’ve been missing out on an entire division while they’ve been gone, so we’ve been missing two opportunities to get points at every show so far this season. Once we get those people back, we’re hoping to gain those points back and then place higher as a team.”

The Wofford team will co-host its own show with Furman University and Converse College on Feb. 24, in Tryon, N.C. It is the first year Wofford will host a show, and the team is hopeful to place even higher. They also hope the Wofford community can come out to support them.

“For most of our shows we have to travel pretty far away, but this one will only be 25 to 30 minutes from campus,” Andrews points out. “We really hope people will come out and show support.”

Besides the Tryon show, next semester the team also will compete at Georgia Southern and at another show at the College of Charleston and then regionals in March, also at Georgia Southern. So far, one individual team member has qualified for that regional competition, but a few of the other riders are on the cusp of earning adequate points.

Following the season, the team hopes to continue discussions with the college to be recognized officially through the Department of Athletics as an NCAA sport. For now, it still is considered a club or intramural team.