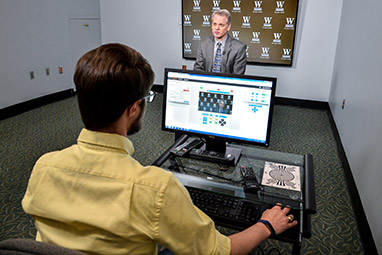 Dr. Mark Byrnes, professor of history at Wofford, tapes an interview in the college's new ReadyCam studio, with assistance from Craig Sudduth, director of digital marketing.
2018-03-20

SPARTANBURG, S.C. – Looking to connect its experts with networks around the world without leaving campus, Wofford College has installed VideoLink’s ReadyCam, an on-site television studio system.

The ReadyCam provides Wofford with broadcast-quality video for live and recorded media interviews and helps facilitate other video productions for the campus.

“The ReadyCam capabilities give Wofford the opportunity to make our campus network of experts available to global media via live and recorded interviews. The system also allows us to provide a location for media interviews with other local and regional newsmakers and experts in today’s fast-paced, around-the-clock news cycle,” says Annie Mitchell, vice president for marketing and communications.

Wofford President Nayef Samhat says the college is grateful for the generosity of Van D. Hipp Jr., a 1982 Wofford graduate, who funded the establishment of the ReadyCam studio and capabilities at Wofford. Hipp is a regular contributor to national news outlets, including CNN and Fox News, as an expert commentator on national security and international affairs issues. He is chairman of American Defense International Inc. in Washington, D.C.

According to Hipp, “It is important to share these experts to demonstrate the caliber of professors and leaders at Wofford to a broader audience. Also, the ability to serve as the studio for national and international interviews of non-Wofford newsmakers allows the college to provide a huge service to the news media.”

Fully equipped with a high-definition camera, broadcast-quality audio and lighting, an electronic backdrop and IP-based transmission, the easy-to-use, in-house broadcast studio is operated by engineers at one of several VideoLink operations centers remotely, eliminating the need for Wofford to have technicians on site.

“The ReadyCam studio enables Wofford College thought leaders and experts to respond to live network interview requests without leaving campus,” says Lloyd Bunting, senior vice president of sales and marketing for Videolik. “Whether it’s a live TV interview, webcasts or on-demand video, Wofford can produce it all from its ReadyCam studio.”

Among dozens of Wofford College experts available for interviews are:

Dr. Helen Dixon, assistant professor of religion – Dixon is an expert in ancient Middle Eastern texts (including Hebrew, Greek, Phoenician, Akkadian cuneiform, and other languages and scripts) and the archaeology of religious sites and practices. Her work on Phoenician material culture ranges from ancient Lebanon, Syria, and Israel/Palestine across the Mediterranean. At the University of Helsinki in Finland, where Dixon worked as a postdoctoral researcher before coming to Wofford in the fall, she helped win an eight-year, 8 million euro (about $9.4 million) grant for collaborative research into how empires shaped social realities in the first millennium BCE.

Dr. Mark S. Byrnes, professor and chair of the Department of History – Byrnes is an expert in American political history and foreign policy, particularly the American presidency, the Cold War, refugees and immigrant issues, and contemporary American politics. He currently is researching the role of radio in American politics during the World War II era.

Dr. Courtney M. Dorroll, assistant professor of religion and Middle Eastern and North African Students (MENA) – Dorroll’s expertise includes Islam and gender, refugees and immigration, and educational virtual exchanges. She received a two-year grant to use virtual exchange between youth in the United States and the MENA area to increase cross-cultural understanding and equip young people to participate in a global economy.

For more about these four Wofford College experts and a listing of other college experts available to be interviewed, either in person or via the new ReadyCam, contact Laura Corbin, director of news services, at laura.corbin@wofford.edu or 864-597-4180.