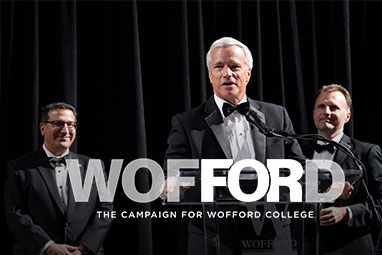 "SPARTANBURG, S.C. – Wofford College today announced the launch of the public phase of its most ambitious fundraising campaign in the history of the college, “For Wofford: The Campaign for Wofford College,” with a goal of raising $300 million by October 2022.

“The ‘For Wofford’ campaign provides essential support for a strategic vision that promises to make Wofford College more relevant and important to the world than ever before, while also remaining true to the values that always have shaped Wofford and all of us who call it home,” President Nayef Samhat says.

The college already has raised $262 million toward the overall campaign goal. Among the campaign’s notable accomplishments are the new Rosalind Sallenger Richardson Center for the Arts, the Jerry Richardson Indoor Stadium and more than $32 million for endowed scholarships.

“Each gift is important to the campaign,” says Dr. David Wood, senior vice president for advancement. “Together, we have the extraordinary opportunity to demonstrate that we are ‘For Wofford’ by affirming the college’s place as a premier, innovative and distinctive national liberal arts college defined by excellence, engagement and transformation.” Four essential pillars of the Wofford experience serve as the key priorities of the “For Wofford” comprehensive fundraising campaign:

• “Student Opportunity in an Inclusive Community” focuses on recruiting and retaining outstanding students and providing access to a superior liberal arts education through endowed scholarship funding.
• “Excellence in Academics” focuses on attracting and supporting faculty who will engage, educate and mentor students and provide academic program support to enhance the liberal arts experience.
• “Distinctive Student Experiences” focuses on supporting hands-on, experiential learning that occurs across fields, disciplines and programs designed to prepare superior students for meaningful lives as citizens, leaders and scholars.
• “Our Historic Campus” focuses on improving the physical campus to create dynamic learning and living spaces that encourage discovery and collaboration and that make Wofford College distinctive.

For more information or to participate in “For Wofford,” visit www.wofford.edu/forwofford. Follow the campaign on social media using the hashtag #ForWofford."