Selected works from Robicsek collection to be shown through April 7 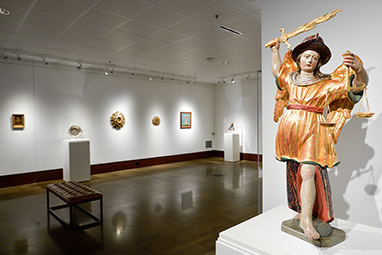 SPARTANBURG, S.C. – The arrival of the Spanish to the Americas from the 15th century through the 19th century introduced Spanish beliefs and traditions to the regions, creating a new artistic tradition that evolved with the convergence of cultures. This influence can be seen through selected works on exhibit at Wofford College, on loan from the collection of Dr. Francis and Mrs. Lilly Robicsek of Charlotte, N.C.

The exhibition, “Spanish Colonial and Religious Art,” in the Richardson Family Art Museum in the Rosalind Sallenger Richardson Center for the Arts, “offers a unique opportunity to appreciate paintings, sculptures and silver pieces from three centuries (c. 1600-1800) of colonial Americas,” says Dr. Youmi Efurd, curator of the art museum. “This exhibition showcases artworks representing artistic tradition and religious practices of diverse cultures and geographic areas, including Mexico, Peru and Ecuador. Visitors will view tangible examples highlighting the significant role of Christian religion and influence as well as the assimilation of European artistic traditions in the colonial Americas.”

“Spanish Colonial and Religious Art” will be on exhibit through Saturday, April 7. On Thursday, Feb. 15, Dr. John C. Akers, associate professor in the Department of Modern Languages, Literatures and Cultures, will perform Latin American guitar music; the program is free. Hours for the art museum as well as the Richardson Family Art Gallery are 1-5 p.m. Tuesdays through Saturdays, with extended hours on Thursdays through 9 p.m.; closed Sundays and Mondays. Admission is free. The museum and gallery are part of the Spartanburg ArtWalk held on the third Thursday of each month from 5 to 9 p.m.

The exhibition includes a variety of oil paintings, such as “Santo Domingo Holding the Infant Jesus,” “Saint Martin Preaching to Native Americans” and “The Virgin of the Candlestick with Christ Child” as well as wood carvings such as “St. Michael Archangel” and other artifacts.

The works showcase how religion was a major motivating factor in the Spanish settlement of the Americas, especially Mexico and Peru, the greatest focus of Spanish interest and the most outstanding regions for artistic production in the colonial period. From around the mid-17th century, if not earlier, local traditions began to develop quite independently of their European referents, and by the late 17th century, distinctive styles developed in metropolitan Mexico, Quito, Lima and Cuzco. Visual culture in the colonial period often was multivalent and dissonant, reflecting its societies in which many ethnicities interacted.

The pieces are selected from the extensive collection of retired Charlotte heart surgeon, art collector and author Dr. Francis Robicsek and his wife, Lilly Robicsek. The couple, renowned art collectors, have shared pieces from their impressive collection at the Mint Museum in Charlotte as well as in several books on pre-Columbian Mayan art, ceramics and history.

The Robicseks also have donated many works to Wofford College’s Fine Arts Collection, including Hungarian paintings and Chinese funerary objects.

In 2017, Robicsek, a retired cardiothoracic surgeon, received the American College of Surgeons’ Surgical Humanitarian Award for his more than 50 years of work to provide medical care, particularly cardiothoracic services, and establish a medical infrastructure in Central America.