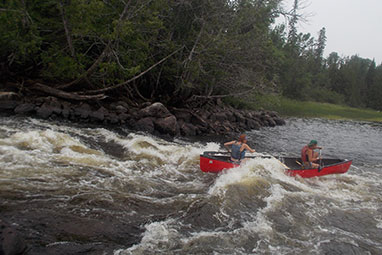 SPARTANBURG, S.C. — How does a Wofford College first-year student prepare for uncharted territory – the rigors of a full class schedule, meeting waves of new people and living away from home?

Consider Carolyn Kline’s approach. The Chattanooga, Tenn., resident spent a chunk of her summer canoeing on wild rivers in Canada, serving as a co-leader of a 450-mile river trip that took her group of seven women into some of northern Ontario’s most beautiful backcountry.

It was not a trip for the timid or the uncertain. The two rivers traveled by the group – the Missinaibi and the Moose – feature long stretches of difficult rapids, and there was little time for relaxation. Kline’s group finished in 14 days a trip she said typically stretches across a month.

“We got up at 6 a.m. every day and got to our campsite that afternoon at 4,” she says. “We paddled all day. Didn’t stop for lunch. We ate on the river.”

The spectacular scenery, enhanced by brilliant sunrises, was not new to Kline. Her father, Will, introduced her to a summer camp in the area when she was 8, and she returned every summer to paddle the waters of the area.

She first made the 450-mile trip in the summer of 2016, gaining enough experience to become a co-leader this year.

The trip began at Missinaibi Lake. The Missinaibi River eventually flows into the Moose River, and the trip ends on that river in the town of Moosonee, a northern Ontario location reachable only by train or across river and lake waters.

“When you get to that town, it’s the best feeling,” Kline says. “It was great to think that I just did all that. I felt I could do anything, especially after leading it. It kind of gave me a new leadership role.”

On the return trip, the canoeists (and their canoes) travel by train south. They put in again at Missinaibi Lake, then paddled to the camp dock, where campers wait to celebrate their return – and their accomplishment.

Along the way, which included portages of three and 1.5 miles, the group spotted moose, otters and bald eagles.

Now Kline is safely at home at Wofford. She arrived by car.