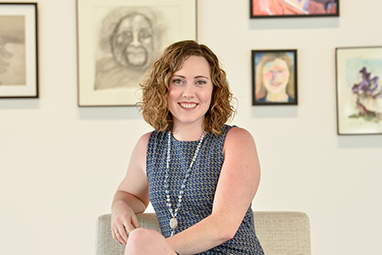 SPARTANBURG, S.C. – “Para ti” are two simple Spanish words that mean “for you.” They may be simple words, but they are powerful and inspiring to Lydia Estes, a Wofford College sophomore who was named today (Tuesday, May 8) as Wofford’s 35th Presidential International Scholar.

The announcement was made by President Nayef Samhat during the annual Honors Convocation in which academic and leadership Awards are presented to students.

As the Presidential International Scholar, Estes, a Spanish and art history major with a minor in government from Carlisle, Pa., will travel beginning in July to developing countries to conduct independent research on her self-selected topic of “The Role of Art in Women’s Rights Movements in Latin America.” She is the daughter of Julie and Larry Estes of Carlisle.

“Lydia Estes has an extraordinary ability to see the world from many sides. Her research as the Presidential International Scholar will employ that ability as she studies the capacity of art to influence social justice,” Samhat says. “Her interests in a variety of disciplines, ranging from government to art to language, exemplify the kind of liberal arts education we value at Wofford. She can see herself as an artist, as a researcher and as a leader. Her experiences as she travels over the next year will only serve to enhance her innate curiosity about the world in which we live, and we are proud she will represent the college as she goes. We look forward to her sharing her research with the campus when she returns.”

Estes’ inspiration for her research topic is a young girl named Jennifer, who lives in the region of Copan, Honduras. Estes met the tall, then-10-year-old girl who had dreams of becoming a doctor, but who was about to complete her last year of formal schooling because her parents could no longer afford to pay for their daughter to receive an education. “However, she was lucky to have received the formal schooling that she did because until she was about 6 years old, Jennifer was forced to live outside her village’s walls,” Estes explained.

As a small child, Jennifer was ostracized by her community because she was seen as “too uncoordinated” – evidenced by her propensity to run into other children while playing, not being able help her mother prepare meals and often tripping and falling. “As it turns out, Jennifer was born effectively blind,” Estes says. “Once her family understood that Jennifer simply needed glasses, she was welcomed back into her community.”

Estes says while Jennifer was shunned and not allowed to attend school, she had walked her siblings to and from school and had listened to them – learning many things she would have learned in the classroom. “It was when Jennifer was enrolled in the second grade that she dreamed of becoming a doctor – an admirable aspiration since no woman from her village has ever completed high school,” she adds.

“On our last day together,” she continues, “Jennifer handed me a white piece of paper with my name across the top. The red outline of a heart filled the page, and the words ‘para ti’ – ‘for you’ – were written beneath. It is my connection to Jennifer – and her dream – that has inspired my interest in women’s rights across Latin America.”

Estes will travel to Chile, Uruguay, Brazil, Ecuador and Nicaragua for her research as the Presidential International School, then she will spend 12 weeks in Paris and Rome as part of her original study abroad plans made before she was named the scholar.

“I want to investigate women’s concerns about gender and equality and how they are expressed through art, asking and attempting to answer the question, does visual art significantly impact women’s perceptions of the rights movement across South America,” she says. “I want to understand the regional styles, methods and rhetoric that are most impactful in promoting the women’s rights movements.”

She plans to identify influential women artists and writers in the countries she visits, analyzing their existing visual works along with how the women collaborate with political leaders to disseminate the imagery, “thus mapping the relationships among artists, writers and the leading figures in the rights movement,” she says. She will document the imagery she finds along the way through photography and videography, recording her interviews with artists to provide “the perspective of those who are behind the creative process.”

Estes’ academic sponsor is Dr. Karen Goodchild, Chapman Family Professor of Humanities and chair of the Department of Art and Art History. “With her support, I will have the resources necessary to critically analyze art related to the women’s rights movement,” Estes says. Dr. Laura Barbas Rhoden, professor both in the Department of Modern Languages, Literatures and Cultures, has been influential in shaping Estes’ interests in Latin American issues.

This summer, she will conduct research with Dr. Kim Rostan, associate professor of English, with the Global Literature in Libraries Initiative, a nonprofit international organization of academics, publishers and translators. Estes and another student will research works that are available in translation from small presses, but under-represented in libraries and American circulation.. “I likely will focus on translated works from South America, thematically coding and organizing translated works form individual countries into an open-source database hosted by TinyCat,” she says. “The research will involve interviewing translators, publishers and writers to identify significant works of literature in those regions that are, or are not yet, translated into English. Both the trends in translation work and the gaps we find will become the basis for scholarly research and presentation.”

Her travels as the scholar are not Estes’ first foray into travel and study abroad. Since arriving at Wofford, she spent the summer of 2017 in Tanzania and Interim in Nepal and Tibet. Still, she’s found time to participate in campus activities, such as serving on the staff of the Old Gold and Black student newspaper, tutoring other students and being a member of Wofford Ambassadors and the Purple Scarf Society.

She’s also found that her Wofford friendships are providing her opportunities while she travels as the Presidential International Scholar. When Fredy Madrid, a sophomore from Honduras, heard about her travels to Nicaragua, he insisted on contacting his brother and sister-in-law who live there to arrange for Estes to stay with them; Daniela Samaniego, also a sophomore, who is from Quito, Ecuador – a newly made friend – has provided advice on where to stay, the best foods to try, the places to visit and other advice for her trip to Quito. “To me, both Fredy and Daniela are great examples of what it means to be a part of the Wofford community because they are so willing to share their homes and families with me and support my endeavors in whatever way they can. Suddenly, my Wofford community has extended to South America.” She adds that her first-year roommate from Brazil has invited her to spend the Christmas and New Year’s holidays with her and her family, since she won’t be coming home to be with her own family.

On her return to Wofford’s campus in the fall of 2019 for her senior year, Estes will create a reflective, mixed-media piece centered on her photographs, to be presented to campus and other audiences.

Estes says she framed and has kept Jennifer’s card that inspired her. “To me, it is a work of art that symbolizes the unfathomable number of girls who deserve so much more than they have received and the resilience of dreams despite immense obstacles, such as a lack of education, gender hierarchy and even something as seemingly menial as poor eyesight.”

Also in honor of Jennifer, Estes’ curated works and presentation will be titled “Para Ti” – “for her and for everyone who sees it.”