Students delve into the world of high performance computing 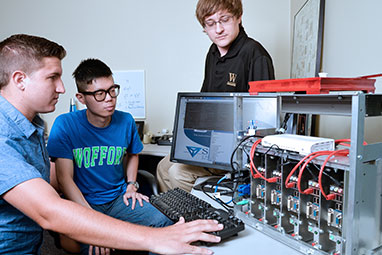 Diego Losada Rubio ’21 and Taeyoung "Kevin" Shin ’19 spent the summer getting paid to learn, and they definitely earned their stipends.

Through the XSEDE EMPOWER program, the Wofford College students were exposed to the world of supercomputing through a progression of learning outcomes and responsibilities. They conducted their own research, worked with the college's LittleFe (a supercomputer appliance), made connections in the world of computational science and attended national conferences and training institutes.

"We're willing to incentivize learning," says Dr. Bob Panoff, Wofford's scientist in residence and executive director of the Shodor Foundation, a national resource for computational science education. Panoff was Dr. Beau Christ's first call when Losada Rubio and Shin approached him as coordinator of the college's emphasis in computational science about summer research opportunities. "XSEDE, which stands for Extreme Science and Engineering Discovery Environment, is a program funded through the National Science Foundation that goes hand in glove with several supercomputers that the NSF also has funded. It's intended to grow the human side of high performance computing."

The Shodor Foundation is in charge of the EMPOWER facet of XSEDE (Expert Mentoring Providing Opportunities for Work Education and Research). Panoff and Christ mentored the students and ensured that they made connections in the greater computer science community. The summer experience included an all-expense-paid trip to PEARC18 (Practice & Experience in Advanced Research Computing Conference) in Pittsburgh, Pa., in July.

"We met professors, researchers and volunteers in the field," says Shin, a computer science major with minors in economics and mathematics from Busan, South Korea. "We realized at the conference that we had made good progress and good connections. Now we can offer practical advice to other Wofford students."

Losada Rubio, a physics major with an emphasis in computational science from Granada, Spain, also spent time at the National Center for Supercomputing Applications at the University of Illinois at Urbana-Champaign with the Blue Waters Petascale Computing Project.

"I was exposed to every aspect of high performance computing during the 2-week institute at Blue Waters," says Losada Rubio, who, along with Shin, spent about 30 hours a week as an XSEDE EMPOWER learner. As part of the XSEDE program, the students also had access to the Blue Waters computer (almost 3 million times faster than the average laptop) to do their own research. Losada Rubio's research involved planetary movement and the formation of the universe; Shin's analyzed fraud detection in the finance industry.

According to Christ, Losada Rubio and Shin met their goals for the summer and can reapply to become apprentices for more challenging high performance computing experiences. The intern level, which involves independent problem solving and research, completes the progression.

"In our program, you have to want to be good," says Panoff. "We provide opportunities for students to develop expertise at the undergraduate level so when they graduate they will be ready for graduate school or to work with high powered computers."

Christ, assistant professor of computer science, says the college is fortunate to have an emphasis in computational science.