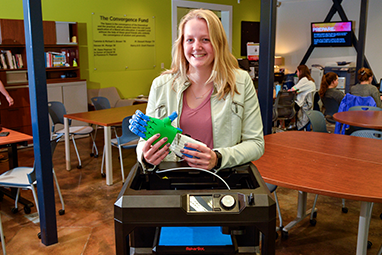 SPARTANBURG, S.C. - Wofford College sophomore Catie Cronister wants to lend a hand - literally. She is using one of the college's 3D printers to build prosthetic hands and arms for Enabling the Future, an organization that assists people who are unable to afford their own prosthetics.

"I've always loved building things and getting hands-on experience," says Cronister, a mathematics and biology double major with a minor in physics from Chicago, Ill. "My studies intersect in the field of biomedical engineering, and I became interested in prosthetics because of the additional opportunities to create and build."

During Interim 2018, Cronister explored 3D printing and design in Dr. James Bednar's Inventor's Lab course. She recently completed her first trial prosthetic hand, which allowed her to get certification needed to complete requests for people in need. She is in the process of printing a prosthetic arm to gain that certification as well.

"It's so incredibly cool and humbling to have the opportunity to make this sort of difference in someone else's life," says Cronister. "Being a student-athlete on the Wofford volleyball team, I know how important it is to have full physical function. I can't imagine not having that, especially if that lack is just because you don't have the means to buy a prosthetic."

Curt McPhail, executive director of The Space in the Mungo Center, Wofford's professional development center, has given Cronister access to the printer as well as project advisement.

"I already knew Catie. I trusted her and knew how passionate she was, so giving her access to the printer and to my office was not a problem," he says. "It was funny because I would walk in on Monday morning and there would be new hand parts printed out and ready for assembly. … We are committed to helping our students achieve their goals, whether it has to do with resume building, cover letter writing or 3D printing."

Cronister will be at Wofford this summer doing research in the lab of Dr. Carolyn Martsberger, assistant professor of physics. She also intends to continue to refine her process and keep printing prosthetics.