Wofford students experiment with 3D design and printing during Interim 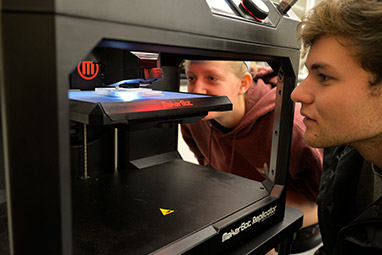 SPARTANBURG, S.C. — Lucas Cerbelli believes the warnings about the long-term damage caused by overcharging his mobile phone. Still, he finds it most convenient to charge his device overnight.

Over the month of January, the Wofford College sophomore from Madrid, Spain, decided to design a solution — a phone charger and holder that raises the phone up and away from the power when the charge is complete. Cerbelli used 3D computer-aided design software, a 3D printer and electronics prototyping tools to complete the project as part of Inventor's Lab, an Interim class taught by Dr. James Bednar, associate professor of philosophy.

The class used, adapted and modified several current and emerging technologies in new and novel ways, both to create new things and to discover new uses of extant technology.

Joshua Nunez, a first-year physics major from Brownsville, Texas, took the class because he wants to be an engineer, and Inventor's Lab "is engineering on a basic level." He enjoyed experimenting with different projects and different technologies.

Christopher Overton, a first-year student from Spartanburg, also chose the course because he wants to go into engineering.