From theory to engagement 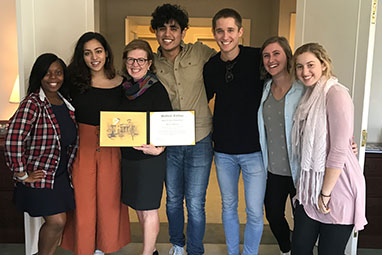 While in Washington, D.C., Wofford students met the Rev. Dr. Susan Henry-Crowe, general secretary of the General Board of Church and Society of The United Methodist Church, who received an honorary degree from Wofford.
2018-12-13

“We wanted to focus not only on the theory that goes with all the research and outcomes, but we wanted to actually try to go out and work with engagement,” Jones says.

The group visited the Methodist Building; the Capitol Building, where they attended Friday jumah prayers; the UN Foundation; the Berkley Center; the United States Holocaust Memorial Museum; and the Washington National Cathedral. “A few of us also attended a hip-hop performance with an international cast of dancers, all of whom are Muslim,” Jones says.

Peter Coombs ’20 says he’s had “an exceptional experience in the class. I have learned about the history of religious pluralism and engagement as well as the current issues that arise with the subject today. This has been the most eye-opening part for me, as studying ancient cities where pluralism was prevalent can thoroughly relate to and counter some aspects of today’s culture.”

Coombs, who is from Toronto, Canada, says the Washington trip allowed him to expand his research and interest in the topics of pluralism and interfaith engagement. “Understanding the history and interactions between differing religions and cultures is very beneficial for the future of university students.”

Whether students are religion majors or not, and whether they plan to go to seminary or into another field, studying these issues will help them wherever they go, Robinson says. “If you’re in the health care field, for example, you need to know how to deal with people of different religious backgrounds. These are not ethical decisions, but day-to-day ways of relating to people,” he adds, recalling the first time a Hindu student’s parent died and he wasn’t sure how to respond appropriately and found no help from the hospital chaplain.

“I just realized what a need there is to know these things,” he says. “This emerging field of interfaith and religious pluralism focuses not only on the acquisition of a certain type of religious literacy, but also on skills — skills for engagement.”

Jones and Robinson have garnered a "cascade of grants" and have made national and international presentations on the field of interfaith studies. Read more about them at https://www.wofford.edu/about/news/wofford-today/archive/2018/winter/for-excellence-in-academics/.