From farm to factory

Wofford students examine the economics, history and politics of cotton 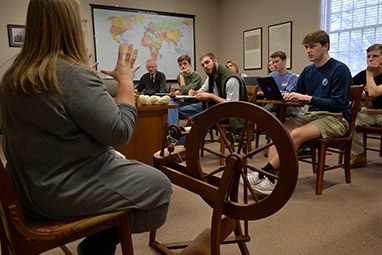 "Most of the mills have closed," says the Winnsboro, S.C., native, "but they sustained the area for a long time."

McMaster spent the month of January learning more about cotton than he ever thought possible during the "Cotton: The Shame and Unknown Glory of the American South" course taught by Dr. Bill DeMars, professor of government and international affairs and chair of the department. According to DeMars, the class examined the role of cotton growing and factory production in national and global economies; the harsh realities of slavery, sharecropping and forced prison labor for cotton growing; and the economy and culture of textile mills in the Northeast, as well as the varied and evolving views of slavery and cotton in the North and South prior to the American Civil War.

Students in the class read books, watched films, met with experts in the field and visited several textile mills and museums.

One of those experts was Jenn Hendrix, a fabric artist with Yarn & Y'all in Greenville, S.C. Hendrix visited the class and brought with her a spinning wheel, drop spindle, hand carder, raw cotton and wool fabrics, a table-top version of the cotton gin and other items to show students how cotton was cleaned and processed.

McMaster signed up for the class partly because of his interest in history. He discovered, however, that textiles aren't just a thing of the past. The class visited Inman Mills on Jan. 23, and Norman Chapman, president and COO of the company, shared a look at cotton's future.

"Norman Chapman, great-grandson of founder James Alfred Chapman, has worked at Inman Mills for over 30 years," says McMaster. "He notes that the textile industry is cyclical, and not dying as some might assume. Today, for example, much of their income derives from the manufacture of fire-resistant sleeves for Tempur-Pedic mattresses — a niche that, several years ago, did not exist. ... Of course no one can say what change may demand of textile companies in the coming years, but Inman Mills continues to be a important institution of an increasingly global industry."

DeMars also took the group to Gibbs International Inc., where again they saw the global impact of an industry that remains a staple in Upstate South Carolina.

"We toured the warehouses seeing some of the equipment purchased out of textile mills all over the world, and Jimmy Gibbs (founder and chairman of Gibbs International and a Wofford College trustee) gave us about 45 minutes telling us about his business and answering our questions," says DeMars.