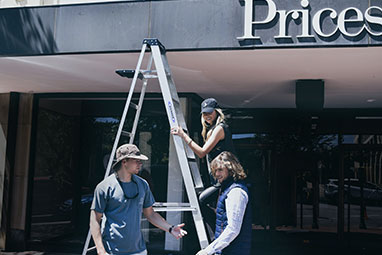 SPARTANBURG, S.C. — The connection between Wofford College and the city of Spartanburg is long and strong. It continues with the current student body – from those working in downtown jobs to lunchtime strolls and dinners at Morgan Square restaurants.

Andrew Brehmer, a senior from Columbia, S.C., worked that connection this year as a marketing intern for Prices’ Menswear, a 115-year-old downtown store.

With the assistance of Wofford students Mary Baxter Harlow, a junior biology major from Summerville, S.C., and Tristan Brank, a 2018 graduate who majored in biology from Spartanburg, S.C., Brehmer produced a video advertising a clothing line for Prices’. The video has been used on the jumbotron in Wofford’s Gibbs Stadium during football games.

Brehmer plans to attend law school after graduation but says video production has been a hobby that he hopes to continue.

“Mr. [Harry] Price has always had a big focus on Wofford students because they have such a big impact in the community,” Brehmer says. “With the new fall edition of clothing, we wanted to get some Wofford students involved because we wanted a draw to get them off campus."

In the 30-second video, Brank wears a variety of Prices' clothing while strolling around town with Harlow.

“I had gone over to Prices’ to do a project for a photography class and asked if I could use the store,” Brehmer says. “The more we talked, Mr. Price eventually offered me a job. I had made videos of a couple of Interim trips, and I was interested in doing more of that.”

A business economics major, Brehmer says the internship and the video project gave him experiences that have been beneficial in his final year at Wofford.