Between the Tolls scholarship inspired by first-year orientation

For student opportunity in an inclusive community 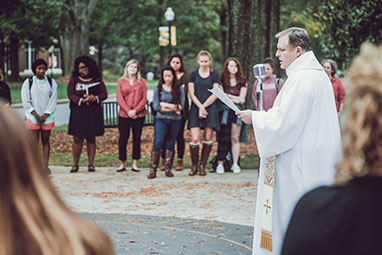 The Rev. Dr. Ron Robinson reads the names of those lost to the Wofford community during the past year.
2018-12-17

Wofford’s new Between the Tolls Endowed Scholarship Fund is a prime example.

When Hampton and Harriet McFadden, who live in Birmingham, Ala., dropped off their daughter, Kendrick ’21, for her first year at Wofford in September 2017, they were in the audience for the Rev. Dr. Ron Robinson’s welcoming speech on the lawn in front of Main Building.

“He made the point that Wofford would ring the bells for each student when they arrived on campus, when they graduated and hopefully much later when they died,” Hampton McFadden says. “Then he said, ‘What matters is what you do between the tolls.’ I’ve heard a lot of speeches over the years, but that absolutely went right to my core.”
The McFaddens’ Between the Tolls Scholarship Fund is the result.

“We want to support the college in as broad a way as possible,” he says. “In charitable giving, you can affect the needs right in front of you and those of the long term. Harriet and I support a number of students in inner-city Birmingham. Their needs are immediate and serious, and you want to do everything you can to help. At the same time, there are some long-term needs out there. You make sure you support institutions so they can be sustainable and meet the problems you don’t even know are coming.”

The McFaddens are still working on the fine points of the scholarship fund and how its monies will be awarded.
“We think what you want to do is support the school and give the school as much flexibility as you can with that,” he says. “We haven’t fully fleshed out the parameters of what we want to do, but our assumption is that you give the money to good people to do their jobs.”

McFadden says he and his wife are dedicated to the idea of supporting Wofford, the college their daughter chose to attend.

“We’re working with her on this because she will be a big part of it going forward,” he says. “Fifty years from now, our daughter will be talking to a Wofford student who is getting support from this.

“It’s clear to us that Wofford is on the move, on the upswing. It has a great energy about it. It’s a great place to study and learn and one that’s building for the future. It’s an easy decision to get behind something that is already great and is building toward even greater things.”

And those bells? It’s a tradition Robinson established when he arrived at Wofford 16 years ago.

“I look for symbols and traditions that people can hold onto,” says Robinson ’78, Perkins-Prothro Chaplain and Professor of Religion. “The bells kind of tie everything together. It works for a lot of people. A student told me that when he came by Wofford for a tour that one of the student guides mentioned it to him and that was the reason he wanted to come here.”