An opportunity to Slack

Wofford student to intern in Silicon Valley this summer 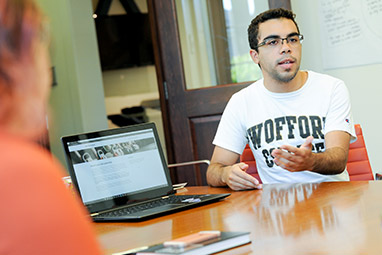 SPARTANBURG, S.C. - Confidence in his Wofford College education has Eduardo Castillo, a junior from Maracaibo, Venezuela, heading to Silicon Valley this summer for an internship with Slack.

The computer science and applied mathematics double major knew when he applied that Wofford was not a Silicon Valley target school, but that didn't stop him from sending in his resume to the team collaboration software company that reached a $2 billion valuation status faster than any company in the world.

"Wofford's computer science program, although small, allows for great things if you're willing to put in the work," says Castillo. "In that atmosphere, you can be noticed and given opportunities to flourish."

Castillo began working with Wofford faculty on computer science research during his first year of college. He published a paper on that early experience and presented at a prestigious conference in Seattle. There he learned about a new program sponsored by Twitter called Take Flight. Out of 900 applications, his was one of 28 accepted.

"Being in such a small group of only 28 students, I learned and gained so much. We had 10 recruiters working and speaking with us all day. We were able to ask them questions, and they gave us really helpful and trustworthy feedback," he says.

Following the Take Flight event, Castillo was accepted to the Out for Undergrad conference in San Francisco, a selective program that advances professional development opportunities for LGBTQ students. It was at this conference that he met Slack recruiters.

"The Out for Undergrad conference was sponsored by every major tech company you can imagine: Twitter, Facebook, Microsoft, Linkedin, Spotify - all of them!" says Castillo. "It was mind-blowing to be speaking to people from all of these giant tech companies."

The interview process for many tech positions is exhaustive with initial interviews, a programming challenge then follow-up interviews. According to Castillo, the process was worth it for the opportunity to spend the summer learning and contributing at Slack.

"The company culture at Slack really resonates with me," says Castillo. "Being a non-white, non-straight person can be tricky, but Slack stood out to me for genuinely being accepting and committed to a diverse environment."

"In Silicon Valley people are working all day and all night. It's constant, which is how you'd think Slack would be since it's a team-based communications platform," says Castillo, "but the company really values and emphasizes keeping a healthy division between work and home."

At Slack, Castillo will be working with the application engineering team as a software engineering intern, helping to design backend code. He joins students from the best computer science programs in the world.

"What's incredibly exciting is that the other interns and I will get to work directly with Slack's products, doing real, effectual projects," he says. "Since the intern class is small, I get to work more directly with my manager and supervisor, who can guide me through the experience."

Castillo will begin his three-month paid internship on June 4. Through this opportunity, he also will receive full benefits and a housing stipend.

"Ultimately, I'm so proud to represent Wofford. Ever since the college search, Wofford was the one college that was really invested in me and gave me the most opportunities, so it's so important to me to promote Wofford in return," he says. "I also hope other students learn that these kinds of opportunities are out there."