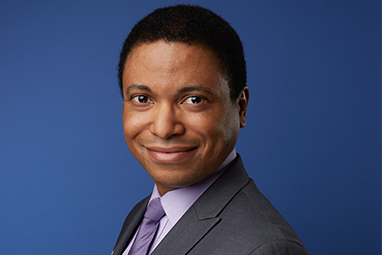 Dr. Douglas E. Wood is a senior fellow on justice and equity at the Aspen Institute and a 1990 graduate of Wofford College.
2018-04-26

SPARTANBURG, S.C. – Dr. Douglas E. Wood, a senior fellow on justice and equity at the Aspen Institute and a 1990 graduate of Wofford College, will be the featured speaker Sunday, May 20, for the college’s 2018 Commencement Exercises. The program will begin at 9:30 a.m. on the lawn of Main Building; the rain location will be Jerry Richardson Indoor Stadium.

During the event, some 425 graduates will receive their degrees, and honorary degrees will be awarded to the Hon. Dennis W. Shedd, a 1974 Wofford graduate and a judge with the U.S. Court of Appeals for the Fourth District, and Michael LeFever, president and CEO of South Carolina Independent Colleges and Universities (SCICU).

“Douglas Wood’s grandfather, Russell Miller, was a groundskeeper at Wofford from the days of President Walter Greene in the 1940s through the administration of President Joe Lesesne. Dr. Wood noted in 2001 when he accepted the Young Alumnus of the Year Award from the college that his grandfather was his ‘first teacher of Wofford history,’ noting that Mr. Miller instilled in him ‘an intense pride in the college’s many contributions to humanity,’” President Nayef Samhat says. “It is a similar pride that we feel looking at Dr. Wood’s accomplishments – teaching in the public schools and working for institutions that improve education for our children. We are proud to have him as an alumnus and are pleased to have him back on campus to share his experiences with our students.”

Wood, a native of Chesnee, S.C., was a program officer at the Ford Foundation on the Youth, Opportunity and Learning team from 2011 to 2018, and for nearly two years he served as acting lead the foundation’s global Higher Education for Social Justice initiative, managing grants in the U.S., Colombia, Peru, Chile, Southern Africa, Egypt and China. Prior to joining Ford, he was executive director and chief education officer of the Tennessee State Board of Education; chair of the Basic Education Program Review Committee that oversees Tennessee’s $3.2 billion K-12 budget; a member of the Tennessee Higher Education Commission; a fellow at the Elliott School of International Affairs, Georgetown University; principal investigator of the National Academy for Excellent Teaching, Teachers College, Columbia University; and associate dean of administration and planning at Eugene Lang College of Liberal Arts, The New School.

Wood began his career as a public school teacher and, while at Harvard, worked as a consultant with the Urban Superintendent’s Program and the World Bank’s Office of East Asian Affairs and taught at the John F. Kennedy School of Government. During this year’s commencement activities of the Harvard University Graduate School of Education, Wood will receive the 2018 Alumni Council Award for Outstanding Contributions to Education.

Wood holds a B.A. degree in history from Wofford College, a master’s degree in English from Middlebury College and a master’s and doctoral degree from Harvard University. He attended schools in Spartanburg County School District 2.

Shedd took senior status as a judge in January 2018. He graduated summa cum laude from Wofford with a degree in government and was the first in his family to attend college. At Wofford, he served as attorney general and a judicial commissioner in the student judicial court system, and he was a member of Phi Beta Kappa. He earned his J.D. from the University of South Carolina School of Law and his L.L.M. from Georgetown University. After law school, Shedd worked in the office of the late U.S. Sen. Strom Thurmond (R-S.C.), first as a legislative aide, later becoming chief of staff. He served as chief counsel and staff director of the U.S. Senate Committee on the Judiciary. After a decade in Washington, D.C., Shedd returned to South Carolina and opened a private law practice. He also served as chairman of the South Carolina Advisory Committee to the U.S. Civil Rights Commission.

In 1990, President George H.W. Bush nominated Shedd as a U.S. District Court judge, and he became one of the youngest judges in the country. During his tenure, he began a successful drug prevention program. In 2001, President George W. Bush nominated Shedd to the U.S. Court of Appeals for the Fourth Circuit; he has served as a federal judge for more than a quarter-century. He has served as a distinguished professor at the University of South Carolina School of Law and, since 2012, has taught courses training students for appellate advocacy and for judicial clerkships.

He received the Order of the Palmetto, the highest award for a civilian in South Carolina, in 2018.

Shedd has established an endowed scholarship fund at Wofford, providing assistance to students participating in travel-study outside the U.S. for Interim. He also has served as president of the Wofford National Alumni Association, was named the Young Alumnus of the Year in 1985, has hosted numerous pre-law groups from Wofford visiting the U.S. Court of Appeals in session in Richmond, Va., and has provided numerous opportunities for students as law clerks and advised countless others in law careers and beyond.

LeFever was named president and CEO of SCICU in 2008. He previously was a principal in MG&C Consulting Services LLC, a governmental relations firm representing businesses, nonprofits and professional associations before the South Carolina General Assembly.

LeFever has been director of four state agencies, including 13 years at the Workers’ Compensation Commission. He also served as deputy chief of staff for executive programs and cabinet affairs in the administration of Gov. Jim Hodges.

LeFever has served in leadership positions in professional and community organizations, including president of the International Association of Industrial Accident Boards and Commissions and the International Workers’ Compensation Foundation; president of the South Carolina Agency Directors Organization; chair of the National Youth Works Alliance; and chair of the Center for Cancer Treatment and Research at Richland Memorial Hospital in Columbia, S.C. The South Carolina Chapter of the American Society for Public Administration named him Public Administrator of the Year in 1986 and again in 2003. He has been honored by Allen University with the Richard Allen Award in 2014, the Columbia College Board of Trustees in 2013 and the Partnership Among South Carolina’s Academic Libraries in 2009 for his work in higher education.