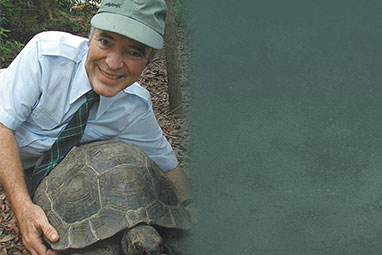 Abercrombie's lecture will focus on the importance of African biodiversity. While teaching biology at Wofford, from 1973 to 2010, he took leave to teach in Zimbabwe, Vietnam and Brazil.

While in Zimbabwe, Abercrombie taught wildlife ecology, wildlife management and agricultural statistics at Africa University. After his retirement, he and his wife, Dr. Chris Hope, have made Zimbabwe and Africa University their second home. There, they continue to teach and serve the United Methodist Church.

Abercrombie, who also taught mammalogy and wildlife management at Vietnam National University, is a graduate of Emory University. After graduation he served in the U.S. Army as a rifle platoon leader in Vietnam. Following the war, he earned his M.Phil. and Ph.D. from Yale University and joined the faculty at Wofford. While at Wofford, his expertise included crocodiles and alligators, and his research was included in a number of publications, such as the Journal of Herpetology and Crocodilian Biology and Evolution.

A retired resident member of Wofford's chapter of Phi Beta Kappa, Abercrombie also was the college's first professor selected to receive the Excellence in Teaching Award from South Carolina Independent Colleges and Universities (SCICU) in 2006.

Wofford received its chapter of Phi Beta Kappa in 1940.