A new way to teach and learn 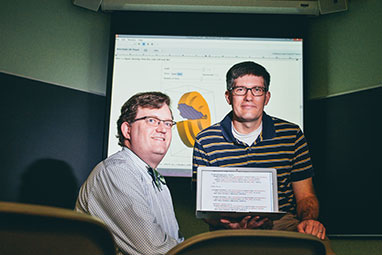 SPARTANBURG, S.C. — It started as a crazy idea. Well, it actually started before that.

Dr. Matt Cathey and Dr. Joseph Spivey teach a lot of calculus, and they — along with their colleagues from around the world — have followed a model for teaching the subject that dates back more than a century.

“About five years ago, we realized that we kept running into the same big problems,” says Cathey, an associate professor in the department.

Cathey and Spivey decided to conceptualize, write and code (a skill each learned for the project) their own interactive, digital text book. It's now on Wofford's Digital Commons, free for anyone.

“We came up with this crazy idea on our own, but we couldn’t have done it by ourselves,” says Cathey. “Our department was very supportive. We all have to teach out of the same playbook if we’re preparing students in a common way, so I appreciate the faith they have had in us.”

Cathey and Spivey worked on various pieces of "Calculus: An Integrated Approach" during their sabbaticals. The online homework system is a huge advantage for students because of its diversity of problems and instant feedback. Three-dimensionality is built into the program to better demonstrate concepts, and both differential and integral calculus are taught side-by-side for a more complete, but uniformly challenging first semester. The second semester is highly theoretical and designed for students who want to consider a major in mathematics.

“Now both semesters tell a more compelling story,” says Spivey. “There wasn’t a text book (until now) that does this. It’s given us an opportunity to serve our students better and in a really cool way, and it’s made calculus even more fun to teach.”