‘Blood of Emmett Till’ events with Tim Tyson also scheduled 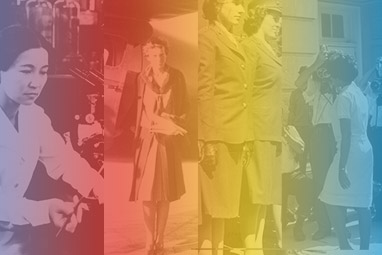 Wofford celebrates Women's History Month in March with a variety of events and activities.
2017-02-24

SPARTANBURG, S.C. – Women's History Month events and the Tyson Family Lecture on the Preservation and Restoration of Southern Ecosystems are highlights of events in March at Wofford College.

Other events include two focused on the book "The Blood of Emmett Till" with author Timothy B. Tyson, along  with guest lectures, films and art exhibitions.

All events listed are open to the public and are free of charge unless otherwise noted. Please check the online calendar at calendar.wofford.edu for frequent updates. For athletics events, please go to athletics.wofford.edu.

Wednesday, March 1
Artist Lecture: “Fair is Foul and Foul Ain’t Fair”
Artist Shanequa Gay
4 p.m., Olin Teaching Theater, Franklin W. Olin Building
Shanequa Gay presents a series of works that depict tales driven by media and the artist’s imagination concerning social consciousness through abstraction of Southern tradition and photographic references. Through a combination of consensual and forced realities, folklore, dream and the afterlife, her works explore the historical and contemporary social concerns of black culture to teach lessons about morality, society, identity and human function. The exhibition will be on display in the Martha Cloud Chapman Gallery in the Campus Life Building through April 7. The event is sponsored by the Wofford Cultural Affairs Committee.

Thursday, March 2
“Reflect, Release & Rise” Kickoff Event
11 a.m., Seal of Main Building
Attendees will gather for a morning of empowerment. They will be asked to reflect on how women are perceived and to release any negative connotations through a symbolic exercise. Annie Mitchell, vice president for marketing and communications, will be the guest speaker. Sponsored by the Office of Diversity and Inclusion.

Tuesday, March 7
Student Presentations: “Two Minutes to Tell Your Story”
6 p.m., Olin Teaching Theater, Franklin W. Olin Building
Wofford students participate in a creative competition of photographs and presentations about their international travels. Students each will use six compelling images and a two-minute story to describe their experiences.

Thursday, March 9 (NOTE DATE/TIME/LOCATION CHANGE)
“Then & Now”: Wofford’s First Women Panel Discussion
11 a.m., Holcombe Room, Burwell Building
Dean of Students Roberta Bigger, Associate Vice President for Student Affairs Dean Beth Wallace and Dr. Carol Wilson, professor of English, will talk about their days as students at Wofford. They were among the first group of women admitted to Wofford. Kayla Hill, Wofford Class of 2017, will host the event, sponsored by the Office of Diversity and Inclusion.

CANCELED due to weatherSunday, March 12
5K Empowerment Run
9 a.m., Seal of Main Building
Students and others will celebrate Women’s History Month by running or walking this 5K. Participants may dedicate their miles to those women around the world who are not even allowed to leave their houses. Sponsored by the Muslim Student Association.

Tuesday, March 14
Guest Lecture: “To Serve Beyond Death: The Contested Construction of a Colonial Mausoleum in French Morocco”
Speaker: Dr. Stacy Holden, Purdue University
5 p.m., Olin Teaching Theater, Franklin W. Olin Building
During the New Republic (1789-1823), Americans habitually read Barbary Captivity Narratives. The Americans who published accounts of their captivity in North Africa usually identified themselves as “slaves.” In the minds of the readers – then, as now – this term conjured up images of chattel slavery as practiced in the American Deep South. North Africans did often force their captives to perform hard labor, but should captive Americans in North Africa then be considered “slaves”? Dr. Stacy Holden, associate professor of history at Purdue University, will appraise the term “slave” in fiction and first-hand accounts of North Africa that date to the late 18th and early 19th century. The program is sponsored by a Cultural Affairs grant and the MENA Program.

Thursday, March 16
#BecauseOfHer: Appreciation Event
11 a.m., Seal of Main Building
Participants are invited to come out and thank the women in their lives – mothers, grandmothers, sisters, professors. They can write notes telling these women the impact they’ve had on their lives. Sponsored by the Office of Diversity and Inclusion.

Monday, March 20
Guest Lecture: “Welcoming Immigrants to Wofford and South Carolina”
Speaker: Hitesh Tolani, Wofford Class of 2004
11 a.m., Leonard Auditorium, Main Building
Dr. Hitesh Tolani, a 2004 Wofford graduate and now a dentist in private practice in Boston, was accepted to Wofford even when his immigration status was in question. His status was resolved with the help of a Wofford alumnus. Tolani will talk about welcoming immigrants to Wofford and South Carolina. Sponsored by the Diversity and Inclusion Committee.

Wednesday, March 22
Guest Lecture: “An Evening with Tim Tyson”
Speaker: Timothy B. Tyson, Duke University
7 p.m., Leonard Auditorium, Main Building
Scholar, author, filmmaker and activist Timothy B. Tyson of Duke University read from his latest book, the highly acclaimed “Blood of Emmett Till,” the true story of a 14-year-old black youth who was killed by white men after a white shopkeeper, Carolyn Bryant, claimed Till had assaulted her. Bryant later confessed to Tyson that she had lied. Sponsored by the African / African American Studies Program Speaker Series.

Wednesday, March 22
Art History Talk: “Painting Skin: Complexions, Cosmetics and Reproduction in Renaissance Florence”
Guest Speaker: Dr. Rebekah Compton, College of Charleston
7 p.m., Olin 101, Franklin W. Olin Building
Dr. Rebekah Compton, assistant professor at College of Charleston, will discuss “Painting Skin: Complexions, Cosmetics, and Reproduction in Renaissance Florence.” If the eyes are the gateway to the soul, then the skin is the billboard of the body. In 15th century Florence, good skin was in high demand, particularly when diseases such as the plague, ergot and syphilis attacked the flesh with pustules, gangrene and boils. A fine complexion was a mark of beauty and a sign that the body was properly balanced, particularly when it came to reproduction. The toilette, governed by the goddess Venus, provided women with a set of materials and techniques for cleaning, coloring and scenting their flesh. Artists also had “skin in the game,” so to speak. Florentine ladies requested customized pigment blends for their skin, while their husbands commissioned wedding chests and panel paintings of luminescent, rosy-hued bodies, many in the guise of Venus. This lecture examines the materials and techniques that artists used to paint female flesh during a period when the mediums of Florentine art were in flux.

Thursday, March 23
Eating Disorders, Body Image Issues
11 a.m., Olin 101, Franklin W. Olin Building
Eating issues are prevalent at college campuses, with research indicating that 30 percent of students are at risk for developing an eating disorder. Attendees will learn more about eating disorders in general, effective treatment for the disorders and how to help a friend who may be struggling. Sponsored by Wellness Center and the Gender Equality Committee.

Thursday, March 23
Guest Lecture: “Coyote Research on the Savannah River Site”
Speaker: John Kilgo, U.S. Forest Service
11 a.m., Roger Milliken Science Center, Room 212
John Kilgo, a 1989 Wofford graduate and a research wildlife biologist with the U.S. Forest Service Southern Research Station’s Center for Forest Watershed Research, will discuss “Coyote Research on the Savannah River Site.” Kilgo is stationed at the U.S. Department of Energy’s Savannah River Site near Aiken, S.C. His research has focused on the effects of forest management and habitat restoration on various wildlife species, including songbirds, bats, deer and wild turkeys. Since 2005, he has studied the ecology of coyotes and their effects on Southeastern ecosystems, particularly deer populations, and for the past three years he also has been studying wild pigs. Kilgo’s daughter, Caroline, is majoring in biology at Wofford. The program is sponsored by the Department of Biology and the Department of Environmental Studies.

Thursday, March 23
Tyson Family Lecture on the Preservation and Restoration of Southern Ecosystems: “Coyote: A Conversation Between Dan Flores and John Lane about One of America’s Most Resilient Mammals”
Speakers: Authors Dan Flores and John Lane
7 p.m., Leonard Auditorium, Main Building
Dan Flores, author of “Coyote America” and John Lane, Wofford professor of English and environmental studies and director of the Goodall Environmental Studies Center and author of “Coyote Settles the South,” will have a conversation about the rise of coyotes in the South. The Tyson Family Lecture on the Preservation and Restoration of Southern Ecosystems was established in 2012 by Dr. George Tyson, a 1972 Wofford graduate who graduated from Duke University School of Medicine in 1977. Under the purview of Wofford’s Environmental Studies Program, this annual lectureship is devoted to issues related to the preservation, restoration and sustainability of Southern ecosystems. The speakers reflect the entire range of the multidisciplinary approach of environmental studies and may include individuals from academia, business, industry, government, the arts or the nonprofit sector.

Tuesday, March 28
Wofford College Conference on Gender
4 p.m., Montgomery Room, Burwell Building
Undergraduates from various South Carolina colleges will present abridged versions of their research papers. The topics are drawn from across the curriculum, but all reflect some aspect of the academic study of gender issues. Sponsored by the Wofford Gender Studies Program.

Through Friday, April 7
“Fair Is Foul and Foul Ain’t Fair,” works by Shanequa Gay
Martha Cloud Chapman Gallery, Campus Life Building
Shanequa Gay presents a series of works that depict tales driven by media and the artist’s imagination concerning social consciousness through abstraction of Southern tradition and photographic references. Through a combination of consensual and forced realities, folklore, dream and the afterlife, her works explore the historical and contemporary social concerns of black culture to teach lessons about morality, society, identity and human function. (See details above for the Artist Talk and Reception.)