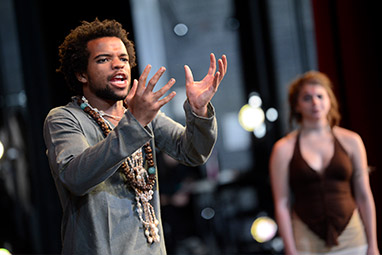 SPARTANBURG, S.C. – Horror and intrigue. Guilt and atonement. Hypocrisy and hijinks. They all take center stage at Wofford Theatre launches its “Season of Justice,” the first season in Wofford College’s new Rosalind Sallenger Richardson Center for the Arts.

The season includes four productions, all designed to highlight the wide range of theatrical experiences made possible by the new center and its Jerome Johnson Richardson Theatre and Sallenger Sisters Black Box Theatre. The productions are “Antigone” (Nov. 2-4 and 8-11), “True West” (Feb. 28-March 3, 2018), “Tartuffe” (April 19-21 and 25-28, 2018) and an original Theatre for Youth production (May 10-12).

“This season holds something for everyone,” says Dr. Mark A. Ferguson, director of Wofford Theatre and professor and chair in the Department of Theatre. “All are invited to join us as we journey back in time and across the globe, along the way exploring questions that have troubled and transfixed humankind since the dawn of time. Audiences will be transported from a war-torn kingdom in ancient Thebes to a modern family home in southern California; from a luxurious household in 17th century Paris to an extraordinary realm yet to be discovered.”

Ferguson starts the season with a fresh, perhaps startling, take on Sophocles’ classic tragedy “Antigone,” “in celebration of the remarkable woman who lends her name to our new arts center, Rosalind Sallenger Richardson,” he says. The haunting play, staged in the Jerome Johnson Richardson Theatre, tells the story of a kingdom ripped apart by civil war and violent discord within its royal family. As a new king attempts to assert his sovereignty, the power of the crown clashes with the strength of a fearless young woman’s convictions. “Two and a half millennia after ‘Antigone’ was first performed,” Ferguson adds, “its driving question is no less relevant – how do we enact justice in a world where what is right and what is law are not always the same?”

The season continues with “True West,” in tribute to late Pulitzer Prize-winning playwright and actor Sam Shepard, who died in July. Best known for plays that challenge long-ingrained visions of an idealized American West as the space of boundless opportunity, Shepard crafted “True West” as an intimate exploration of sibling rivalry and familial discord in the suburbs of Los Angeles.

Staged in the Sallenger Sisters Black Box Theatre, Ferguson and Daniel J. Day, assistant professor of theatre, will take to the stage together for the first time as warring brothers Austin and Lee. Turmoil bubbles just below the surface for the two, as their aspirations collide during a fateful weekend that will change their lives irrevocably. “As lofty hopes turn to crushing blows,” Ferguson says, “Austin and Lee ask themselves, is it possible to cling to an ideal of justice when the call of the lawless desert becomes impossible to resist?”

Moliere’s “Tartuffe,” directed by senior theatre major Tristan Krebs of Louisville, Kentucky, will be staged in the Jerome Johnson Richardson Theatre. In this timeless French comedy of manners, a wealthy patriarch is duped into opening his home to a con artist who masquerades as a religious man of unimpeachable piety. Convincing his gullible host that his intentions are pure, Tartuffe visits chaos upon the household before finding his wits unexpectedly matched. “Fast-paced and full of surprises, ‘Tartuffe’ is packed with sensational plot twists, raucous humor and incisive social commentary, which combine to make this 17th century masterpiece a comedy for the ages,” Ferguson says, “It’s one that challenges audiences to consider the question, how do we fight for truth and justice when those around us are determined to cling to convenient untruths?”

Wofford Theatre’s season concludes with a treat for audiences both young and not-so-young. Local playwright and Wofford theatre lecturer Kerry M. Ferguson brings one of her original Theatre for Youth shows to the stage. “Kerry is an acclaimed playwright, director and performer, and her work brings a spark of magic to the Wofford stage that is sure to enchant and delight,” Mark Ferguson says.

Audiences of all ages are invited to join in the fun in the Sallenger Sisters Black Box Theatre.

“With our 2017-18 ‘Season of Justice,’ Wofford Theatre seeks to reaffirm its commitment to producing timely and provocative works of the highest caliber,” Ferguson says. “We hope audiences will join us as we chart new territory in the Rosalind Sallenger Richardson Center for the Arts.”

Here is the list of production dates and times: