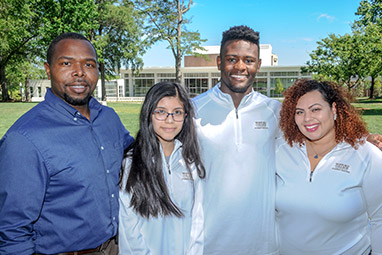 SPARTANBURG, S.C. – Entering college can be a time of uncertainty. Students wonder, “Will I fit in? Will I make friends? Will I be successful?”

For some students, this time can be even more stressful because of personal situations. They may be from lower-income households, or the first in their families to attend college or children of immigrants.

Wofford College is creating programs to help ease this stress for those students who may be more vulnerable. This summer, 20 first-year Wofford students will be part of the first-ever group of Wofford Gateway Scholars, affording them the opportunity to build relationships and learn skills needed to help ensure their success at the college.

The Gateway Scholars program is just one of three initiatives of Wofford’s Pipeline to Postsecondary Success, funded by a grant from the Jolley Foundation. The initiative is a partnership of the Office of Student Success and the Center for Community-Based Learning (CCBL).

“We want students to stay at Wofford, to succeed here and to graduate – to thrive and flourish,” says Dr. Boyce Lawton, dean of Student Success. “We don’t want students to come here and just ‘be’ here. We want them to really engage with the college. We know that ultimately will help them succeed at Wofford and beyond. Early relationships are very important.”

The students who participate in the Gateway Scholars program will begin by spending two weeks on campus this summer building relationships within their peer group of first-year students and learning skills needed for success at Wofford, such as student success skills, technological applications, public speaking and financial literacy. They will learn “how-to” skills of navigating Wofford, including class registration, the electronic portfolio system and the Moodle learning management system. They also will participate in discussions about access to health care and wellness services.

“The Gateway Scholars program is an extraordinary opportunity for participating students to engage in lifelong learning which transforms the college experience,” says James Stukes, coordinator of college access and student success, working in both the Center for Community-Based Learning (CCBL) and the Office of Student Success. He oversees the program as well as other student success initiatives.

The students will be on campus June 26 through July 7 and will conclude the summer session with a two-night retreat in the North Carolina mountains. Additionally, each student will receive a MacBook Air to use as long as they are enrolled at Wofford. The program is free and includes a room in campus residence halls, all meals and other expenses.

“I am thoroughly excited about being a mentor in the Gateway Scholars program,” Myer says. “I love to share my experiences that I have accumulated on campus, off campus in the community and studying abroad. Mentoring, I believe, is essential to the transition throughout the first year in college. I know from my personal experiences that having peer mentors enriched my student experience.”

Myer says she found mentors in various places when she arrived at Wofford, specifically her adviser, Dr. Carol Wilson, professor of English and coordinator of academic advising; Dr. Ramon Galinanes, director of the Bonner Scholars program; and Jennifer Gutierrez-Caldwell, former director of diversity and inclusion. “Without their support and guidance, I would not have made it through my first year as smoothly as I did,” she says.

After not having a mentor for his first year and part of his sophomore year, Ciuffo says during his second semester of his sophomore year, “I was extremely lucky to become close friends with Dr. Lawton. Since then, he has not only served as a guide to school-related questions and issues, but he also has become an extremely important person in my life, like family.
“By a mix of luck and determination, I ended up at Wofford,” he says. “There were many times that I thought it would be impossible, but through ROTC, advisers like Dr. Lawton, friends and grit, I have been able to stay at Wofford and be very successful.”

“I hope to convey to them that no matter what obstacles they face throughout their college career – personal, financial, social, academic or familial – that by accessing the right resources, they will be able to overcome them,” he says.

“I think the Gateway Scholars program will be a tremendous niche for incoming students,” Myer continues. “The program is a wonderful opportunity to give students those vital connections of supportive faculty, staff and students who will be in their corner already before they begin their first year.”

Velazqez-Hernandez says the summer program will help new students “because they will be able to find a mentor who is like them, because we four are so diverse. We have a good mix.”

Wilson agrees. “I think this program will be great. It will give students who most likely have not had anyone within this different life setting. It will allow these students to get a head start, or in some cases, catch up with others.”

He looks forward to being a mentor. “I’ve always been a leader and been in leadership roles,” says Wilson, who adds that his mentors primarily were older football team members. “I will be able to share some of my experiences and hopefully help them have a great freshman year as well.” He adds that he will advise the students to “be themselves. Don’t fit in with the crowd. Be you and be the best you can be. Use your mind and grow.”

The Pipeline to Postsecondary Success initiative consists of two other elements: a “near-peer” college access mentoring program and an “equity tool kit fund” designed to provide equitable experiences for all students.

The “near-peer” college access mentoring program brings together two groups of students working in collaboration with the Citizen Scholars Program in Spartanburg, says Jessalyn Wynn Story, director of CCBL. “Current Wofford students will serve as mentors for high school students in the Citizen Scholars program who are headed to college – whether to Wofford or some other college or university. The emphasis is on helping them to apply, get into and succeed in college.”

The Citizen Scholars Program, an initiative of the Spartanburg County Foundation, is designed to aid Spartanburg County students, especially those who would be the first in their families to go to college, in furthering their education. Students identified as rising 6th graders are provided with mentoring, guidance, encouragement and other resources to help them focus on their personal and academic goals and to be successful in getting into, paying for and thriving in post-secondary education.

Since its inception in the 1990s, Citizen Scholars has been able to support one cohort of rising 6th graders in only one of Spartanburg County’s seven school districts each year. The program now is transitioning to a new model that will allow it to serve students in grades 6 through 12 in all seven school districts every year. Wofford’s partnership with Citizen Scholars, supported by the Jolley Foundation, is enabling that transition. Wofford is taking the lead in developing the partnership and near-peer college access mentoring program, but there also will be a move to involve the other six Spartanburg College Town institutions in the program. “The plan is that by the 2020-21 school year, about 300 college student near-peer mentors will be mentoring, encouraging and supporting the same number of 11th and 12th grade students in all seven school districts in Spartanburg County,” Story says.

The equity tool kit fund is set aside to provide students with individualized assistance based on their needs. “We want to be able to make experiences equitable for Wofford students,” Lawton says. “Because of a variety of circumstances, some students are not able to participate in certain activities – study abroad or internships in other cities or participation in undergraduate research, for example – because they can’t afford it. This fund allows us to put in a few dollars for particular needs to help that student along, thus providing them with the same type of opportunities as their peers.”

The Jolley Foundation, a family foundation established in 1947 in Greenville, S.C., supports efforts to improve the lives of the residents of Upstate of South Carolina.