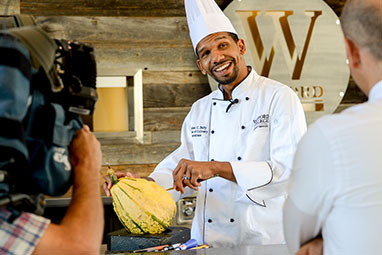 SPARTANBURG, S.C. – Wofford College’s Chef Stephan Baity and his team won Food Network’s 2015 “Cake Wars: Christmas,” so now the expert food carver is coming back for more. Tonight (Monday, Oct. 2) at 10, he and another group of team members start competing for a $15,000 prize for each of three episodes of the network’s new series “Halloween Wars: Hayride of Horror.” Episodes also will air Oct. 9 and 16, also at 10 p.m.

Baity, director of culinary operations for AVI Food Systems, Wofford’s dining services provider, is one of three carvers on the five-member team that also includes a sugar/chocolate artist and a cake artist. They compete against one other team.

“This was a whole new experience because we have a larger team than with ‘Cake Wars,’ and more carvers,” Baity says. On “Cake Wars,” each of four teams consisted of three members. “Plus, this show wasn’t taped in a studio – we are outside in a big pumpkin patch. We’re also carving pumpkins we didn’t select. It’s challenging, but fun and rewarding.”

The teams “face off to create terrifying Halloween displays” that must “win the votes and screams of hayriders and judges (pastry chef) Zac Young and (makeup artist) Bianca Appice,” Food Network’s promotion of the competition says. The show is hosted by Harley Morenstein, actor and co-creator of the YouTube channel “Epic Meal Time.”

Baity says most people think the shows on Food Network are scripted, and that if things go wrong, they stop taping so participants can have a “do-over.” “That’s just not how it is,” he says. “For ‘Cake Wars,’ I didn’t even know my team members until we showed up in the studio. We started taping immediately. I only knew what I had read on the internet and social media about them. If you drop something or your creative falls apart, they don’t stop; you just have to keep going, and they encourage the other teams to start taunting you, just to ramp up the excitement and stress.”

The experience in both competitions was grueling at times, Baity says. “When we were finished, I literally laid out on the floor, I was so spent.”

A native of Ohio and graduate of Pennsylvania Culinary, Baity is a self-taught carver who has been doing it since he was 19. He carves using pumpkins, melons and other foods, and says pumpkins really aren’t his specialty. He also does ice carvings for special events.

At Wofford, Baity says, he loves cooking up great food for students, faculty, staff and visitors, and he especially loves the variety of dining venues the college offers. “From the Burwell Dining Hall, to the Galleria, to Zach’s (right now, Zach’s Express), to Terrier Grounds and the Acorn Café, I don’t know of another college this size – or some even bigger – that offers so many options,” he says.

In addition to his position with AVI/Wofford, he owns Graffiti Me and appears at numerous public and private events, wowing attendees with his carving skills.

On top of all that, on Sunday, Oct. 1, Baity was feted with a dinner in his honor as the American Culinary Federation Akron-Canton Cooks and Chefs Association 2017 Chef of the Year. It’s an honor he describes as “the Oscar of the culinary world.”