Students gain experiences outside of classroom 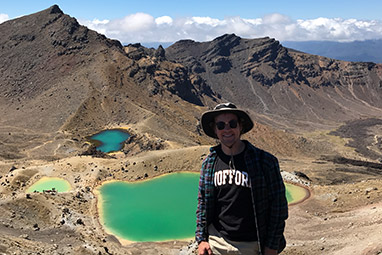 SPARTANBURG, S.C. – Maggie Stewart knew she wanted to study abroad before she even arrived at Wofford College. The 2017 graduate from Arlington, Va., loves “an adventure.”

She got that and much more when she decided to opt for a less-conventional study abroad destination – Istanbul, Turkey. As a double major in international affairs and religion, Stewart thought the destination would help her in her quest to learn about the effect religion has on policy making and about how faith impacts daily life and cultures. “My five months in Istanbul – with side trips to Romania, Greece, Jordan and numerous regions within Turkey – helped me further relate my two majors, and I got to see how much the two truly connected and intertwined.”

It’s exactly the kind of experience Wofford intends its students to have while studying abroad, and exactly why the college again is touted as a national leader in study abroad participation.

Wofford is ranked #4 among the top 40 baccalaureate institutions in the percentage of students studying abroad for credit, according to the annual Open Doors Report from the International Education Exchange, released this week. Wofford is the only South Carolina institution on the list.

Open Doors also ranked Wofford #11 in the total number of study abroad students on its list of the top 40 baccalaureate institutions, with 419 students studying abroad during the 2015-16 academic year. Wofford also is #11 among the top 20 baccalaureate institutions for short-term duration of study abroad experiences, also the state’s only college on the list. These are the highest rankings for Wofford in these two categories.

“Wofford continues its trend of being among the top 10 baccalaureate institutions on the Open Doors Report, something we’ve done for more than 20 years,” says Dr. Mike Sosulski, Wofford’s provost. “As a national residential liberal arts college, we prepare our students to become leaders in the world, to have a global reach in their thinking and problem solving, and to make a difference. We take pride in providing our students with opportunities to learn beyond the classroom. Studying abroad gives them culturally immersive experiences that broaden their perspectives and their understanding of themselves in a globally connected world.” Stewart now is a program associate for West Africa, working mostly in Nigeria, Ghana and The Gambia, at the International Republican Institute, an international democracy-building organization. She says her experience allowed her to learn more about Islam, “which allowed me to understand the people and country better. I had the opportunity to learn how to navigate in an unstable political environment and witnessed a country going through unsettling transformations. These observations and experiences followed me back to Wofford and have shaped my world view and will continue impacting me in my career.”

Amy Lancaster, Wofford’s dean of international programs, says Stewart’s experiences are what Wofford wants for its students. “Our students learn skills that will prove vital in the workplace and in their lives as citizens of an increasingly interconnected world – resilience, intercultural awareness and empathy. Studying abroad provides them with language immersion experiences, rigorous academic programming, impactful research and internship opportunities, and culturally rich living contexts.”

Wofford is ranked highly on the short-term study abroad experiences in Open Doors because of the high number of study abroad participants who study overseas during the January Interim, Lancaster says.

“We are thrilled to return to the top five in the rankings as this year marks a hallmark year in our effort to increase access to study abroad,” Lancaster says. “The 2015-16 year measured in this year’s Open Doors survey indicates a record number of participants for us at 419. As a member of the Generation Study Abroad challenge, Wofford pledged to increase participation in study abroad by 25 percent by 2019. The 2017 Open Doors survey reflects Wofford’s commitment and effort as we reached our goal three years ahead of schedule.”

Wofford is continuing its efforts to make study abroad more accessible for all students, Lancaster adds. “This year, we partnered with CIEE Study Abroad to fund passports for first-time applicants as we recognize that for some, securing a passport may be a barrier to studying abroad. By hosting this important event, we have funded 85 passports to date and made study abroad a more tangible reality for many.”

Wofford also awarded more than $77,000 in Wofford Travel Grants – an all-time record – to reduce financial hurdles for some students. Lancaster adds, “Moreover, Wofford has produced a total of six Gilman Scholars during the 2017 award cycle, which includes study and intern abroad experiences in the spring, with two students; the summer, with one student; and the fall of 2017, with three students.”