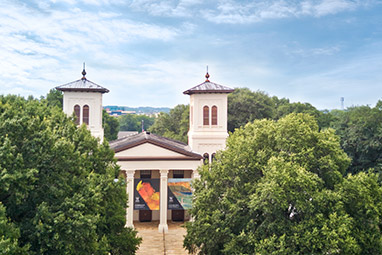 Wofford also is ranked #42 on the list of “Best Value Schools” and #56 in the “High School Counselor Rankings” among national liberal arts colleges.

“Wofford’s continued recognition as one of the best institutions of higher education in the country by U.S. News reflects our commitment to being a premier, innovative and distinctive national liberal arts college defined by excellence, engagement and transformation in preparing our students for meaningful lives as citizens, leaders and scholars,” President Nayef Samhat says. “We consistently are recognized in the leading college guides and publications for our academic rigor, outstanding faculty, study abroad participation and successful graduates.

“The recognition of Wofford as a best value college reflects our long-term commitment to balancing two important priorities: offering an outstanding residential academic program and focusing on affordability for a wide range of students and their families,” Samhat continues. The U.S. News Best Colleges rankings, now in their 33rd year, “provide an excellent starting point” for the college search, the publication says, reminding users to “keep in mind that the rankings provide a launching pad for more research, not an easy answer.” The rankings are based on “such widely accepted indicators of excellence as first-year retention rates, graduation rates and the strength of the faculty.”

The ranking system “rests on two pillars. The formula uses quantitative and qualitative measures that education experts have proposed as reliable indicators of academic quality, and it is based on our researched view of what matters in education.”

The category in which Wofford is ranked – national liberal arts colleges – includes institutions that focus almost exclusively on undergraduate education, awarding at least half of their degrees in the arts and sciences, the publication says.

Most of the data U.S. News uses to arrive at its rankings is provided by the colleges themselves through an annual statistical survey.

For the “best value” ranking, U.S. News takes into account the institution’s academic quality, as indicated by its 2018 U.S. News Best Colleges ranking, and the 2016-2017 net cost of attendance for a student who received the average level of need-based financial aid. The higher the quality of the program and the lower the cost, the better the deal. Only institutions ranked in or near the top half of their categories are included because U.S. News considers the most significant values to be among colleges that are above average academically. This year, there are 108 institutions in the best value national liberal arts colleges.

For the ranking by high school counselors, U.S. News asks guidance counselors from a nationwide sampling of public high schools in the U.S. News Best High Schools rankings that were gold, silver or bronze winners as well as from the largest private independent schools nationwide to tell them which national universities and national liberal arts colleges they think offer the best undergraduate education to their students. The three most recent years of survey results, from spring 2015, spring 2016 and spring 2017, were averaged to compute the score used in the ranking. There are 215 institutions in the ranking this year.

Wofford continues to be included in national college guides for its outstanding academic program, its value and its commitment to economic diversity.

In May, for the third consecutive year – since the list first appeared – Wofford was named to the New York Times’ “Top Colleges Doing the Most for the American Dream,” a ranking called the College Access Index that includes the most economically diverse colleges in the country. Wofford ranks at #103 on the list of 171 public and private colleges and universities, which bases its ranking on the number of lower- and middle-income students – those eligible for Pell Grants – who enroll and the price the college charges them.

Earlier in the year, Wofford was included in The Princeton Review’s “Colleges That Pay You Back: The 200 Schools that Give You the Best Bang for Your Tuition Buck.” The list recognizes institutions for their outstanding academics as well as their affordability.

The Princeton Review recently featured Wofford in the 2018 edition of its flagship college guide “The Best 382 Colleges,” the nation’s best institutions for undergraduate education.

Wofford continues to be among “America’s Top Colleges” by Forbes magazine, a list Wofford has been on since its inception. Wofford is #140 on the list and is #26 among the best in the South. Wofford also is #57 among Top Liberal Arts Colleges, #99 among Top Private Colleges and #94 among Grateful Grads, a list of institutions whose alumni give back to the college.

Wofford also was ranked #145 in Forbes’ “America’s Best Value Colleges,” an index of “300 schools that deliver the best bang for the tuition buck based on tuition costs, school quality, post-grad earnings, student debt and graduation rates.”

In July, Wofford was included in Fiske Guide to Colleges 2018, another prestigious guidebook that profiles colleges and universities on a broad range of subjects, including student body, academics, social life, financial aid, campus setting, housing, food and extracurricular activities.