Using research experience to prepare for the future 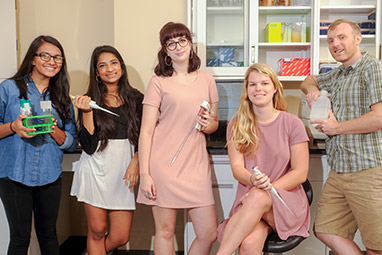 SPARTANBURG, S.C. — The Great Barrier Reef is dying, and a group from Wofford College has joined global efforts to address the problem.

“Coral bleaching is a big threat,” says Dr. Geoffrey Mitchell, assistant professor of biology at Wofford. “Coral reefs are the rainforests of the ocean. They’re among the most biodiverse places on the planet and are important to the world’s food supply, not to mention the multibillion-dollar tourist industry that the reefs support."

Bleaching occurs when coral expel the algae that live inside them; their relationship is symbiotic. Without the nutrients provided by the algae, the coral lose their color and soon die. A heat wave in 2016 left 90 percent of the Great Barrier Reef with evidence of bleaching.

Each student is working on a different piece of the puzzle, but Mitchell says the bulk of the work involves trying to determine how coral and algae maintain their connection. Because coral is difficult to grow in the lab, the students are using anemones and their own endosymbiotic algae. "For example," says Mitchell, "Kajal Patel (a senior psychology major from Philadelphia, Pa.) and Madalyn Snoddy (a senior biology and Spanish major from Columbia, S.C.) are isolating anemone cells and subjecting them to higher temperatures to see how cells change. One hypothesis is that high temperatures cause the algae to divide too much, and they take over so the coral are no longer able to control the growth. When this happens they spit out the algae."

Lacey Tallent of Spartanburg would love to be among the first to demonstrate the hypothesis in the lab. The senior biology major with an emphasis in computer science plans a career in research. "Research can be both rewarding and frustrating, but I enjoy it because you never know what's going to happen."

This summer's research is a continuation of similar research directed by Mitchell last summer. The goal is to share the findings with the scientific community in the form of papers and presentations. For the Wofford students, the goal also is to prepare for careers in medicine, bioinformatics or scientific research.