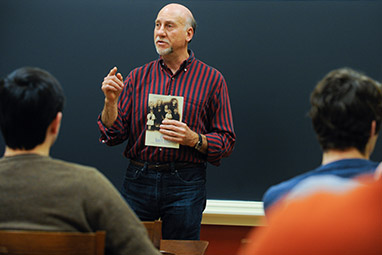 SPARTANBURG, S.C. – It took Dr. Deno Trakas 30 years to bring his simmering, riveting, thoughtful story of forbidden love and international intrigue to fruition. Now, he’s waiting to see what his writer friends and the reading public think of his first novel, “Messenger from Mystery.”

Trakas, the Laura and Winston Hoy Professor of English and director of the Writing Center at Wofford College, has been a writer for decades, artfully filling books with his poetry and fictional short stories along with a memoir, “Because Memory Isn’t Eternal: A Story of Greeks in Upstate South Carolina.”

“Messenger from Mystery” (Story River Books) is the story of English graduate student Jason “Jay” Nichols, a third-generation Greek American “who claims to be named after the heroic Argonaut leader, despite his introspective and self-absorbed nature.” Jay becomes infatuated with one of his students, Azi Ghotbzadeh, whose cousin is the foreign minister of Iran and wants to work with the United States to resolve the Iran hostage crisis of 1979. When Hamilton Jordan, one of President Jimmy Carter’s closest aides, learns that his college friend Jay has a close relationship with a woman with access to the inner circles of the Ayatollah, he enlists Jay’s help. What ensues is “equal parts love story, history lesson and international spy thriller,” says Brett Lott of the College of Charleston in his review of the book.

This first novel – now he’s written a second and is working on a third – had been alive inside Trakas for three decades, itching to get out. “Messenger from Mystery” began as a short story based on his meeting and working with students from the Middle East and Latin America in the late 1970s. “When the Iran hostage crisis began in November of 1979, I had no contact with Iranians, but I remembered my students and wondered what would have happened if … . I followed the events of the hostage crisis closely at the time, but for the book, I had to do a lot of research to remind myself how it unfolded,” Trakas says.

The Iran hostage crisis was a standoff between Iran and the United States in which 52 American diplomats and citizens were held for 444 days. The hostages were taken when a group of Iranian students who supported the Iranian Revolution stormed the U.S. Embassy in Tehran. It stands as the longest hostage crisis in recorded history. It ended just minutes after President Ronald Reagan was sworn into office on Jan. 20, 1981, when the hostages were released into U.S. custody a day after an agreement proctored by Algeria was signed by the U.S. and Iran.

All of the events and the characters involved in the hostage crisis, including Jordan, described in the book are true, says Trakas, a five-time winner of the South Carolina Fiction Project Prize and a recipient of the South Carolina Arts Commission Fellowship in Fiction. The story of Jay and Azi is the fictional part.

While much of the book centers on the relationship of Jay and Azi, “the last third is quite tense, taking place in Iran,” Trakas says. “Azi is kidnapped, and Jay is desperate to try to help her … and … .” You should read the book to find out how it ends.

Trakas says one of the reason it took so long to complete the novel is his writing process. He doesn’t write when he’s teaching, so that slows things down. “I’ve had the good fortune of being granted sabbatical leave a couple of times, most recently in the fall (of 2016), so I could work on a novel instead of teach. Just about every day from the end of last May to the beginning of February, I went to my office early in the morning, sat at my computer, answered email, and then tried to write.

“I’m slow. It dribbles out,” he says, “but I’m stubborn and persistent, and if I stay at it most of the day, I get a page or two.” He says while he’s teaching he doesn’t write fiction “because my head stays full of all the things I need to do and remember to be a teacher.” He sometimes jots down ideas or lines of dialogue he likes – “usually on napkins,” which he pulls out in the summer to weave into the story.

Now that the book is out and on the shelves, Trakas worries about how the novel will be received. “I’m scared to death that nobody will like it. My friends who are writers tell me this is normal.”

If the forward to the novel, written by novelist Elizabeth Cox, formerly the John C. Cobb Chair for the Humanities at Wofford, and early reviews of the book are any indication, Trakas has nothing to worry about.

“After years of reading short stories and poems by Deno Trakas, I am already an admirer of what wonders he can achieve with language, images and characters,” Cox writes. “Now, in his first novel, Trakas shows a talent for enlarging his focus and sustaining the keen interest of his readers in a richly honed cast of characters and a complex narrative unfolding against an historical event: the capture of Americans as Iranian hostages in 1979.

“Through lovers and terrorists, Trakas unmasks (the) very human trait of our selfish blindness to the plights of others,” Cox continues. “He explores the courage it takes to amend this trait in ourselves through empathy and action, and to move at last, with heretofore unknown strength, against our own self-interest and out of a love that is greater than ourselves.”

Ron Rash, author of several novels, including “Above the Waterfall,” writes, “In ‘Messenger from Mystery,’ Deno Trakas seamlessly fuses the personal to the political, and the result is a story that probes the possibility of individual goodness surviving despite two countries’ discord. This novel is an outstanding debut for a very talented writer.”

James M. Scott, a 1997 Wofford graduate and Pulitzer Prize finalist for his “Target Tokyo: Jimmy Doolittle and the Raid That Avenged Pearl Harbor,” adds: “Set against the backdrop of South Carolina and Iran, ‘Messenger from Mystery’ is equal parts coming of age tale, love story and international thriller. Deno Trakas has crafted a power narrative, one that is incredibly relevant in today’s world.”

Now that he has debuted his first novel, Trakas is on a roll. He has completed his second about “The Great Gatsby” author F. Scott Fitzgerald and a fictional Wofford professor of English who meets Fitzgerald on a visit to Spartanburg. This summer, Trakas began another novel “based on a historical event, the burning of Smyrna, Turkey, in 1922 and the heroic acts of a modest American who worked for the YMCA and helped rescue 200,000 people.” He confides that he wrote his Greek grandfather into the novel: “He wasn’t in Turkey at the time, but I took him there (in the book).”

“If, after the sprinkling of readings, signings and other events that may or may not occur over the next four months (for ‘Messenger from Mystery’), I still feel positively disposed toward novels and novel writing,” Trakas says, “I’ll work on that new novel some more.”

Trakas is slated to be at the Deckle Edge Literary Festival in Columbia, S.C., at 3:30 p.m. on Sunday, Feb. 26, and at Park Road Books in Charlotte, N.C., at 2 p.m. on Saturday, March 18. Other book signings and appearances will be scheduled.