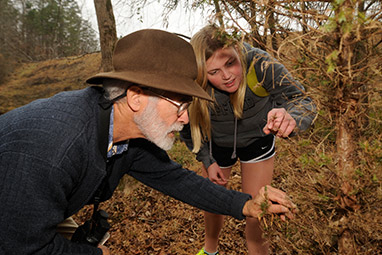 SPARTANBURG, S.C. - Scott Hiler, a Wofford College junior economics major from Pawley's Island, S.C., spends a lot of time in the classroom studying business and finance during the academic year, so he uses the college’s January Interim to learn something totally different. That's why he found the Tracks, Scat, Song and Sign course so appealing.

Led by professor of sociology and anthropology Dr. Gerald Thurmond and professor of biology Dr. Doug Rayner, the course is designed to help students identify mammal tracks, scat and other signs, the calls and songs of common birds, and to understand them as part of the study of animal behavior.

"Taking classes like this makes me realize that even though I plan to go into business after I graduate, I don't want to sit behind a desk all day," says Hiler.

On a walk through Croft State Park, the group found signs of coyotes, beavers, ducks, beetles and deer. According to Michelle Wood, a junior biology major from Spartanburg who plans to become a veterinarian, the group also has discovered evidence of foxes, raccoons, mink, squirrels, rabbits and bobcats.

The faculty are as excited as the students.

"During the recent snow, we found a relatively fresh coyote kill and a fox den," says Rayner, who pulls out his magnifying glass and investigates a line of holes in a tree that one of the students asks him to explain. "I'm a botanist, so this Interim has been a joy for me because it has allowed me to focus on a different area."

In the Interim description, Thurmond wrote: "Those of us who love the outdoors want to understand it and feel at home there. To do that we need to be able to recognize the signs and sounds we encounter in nature."

Mission accomplished, says Wood. "I love the outdoors and I love to hike, but I was always used to walking around and looking up. Now I find myself looking down. This Interim has totally changed my perspective."