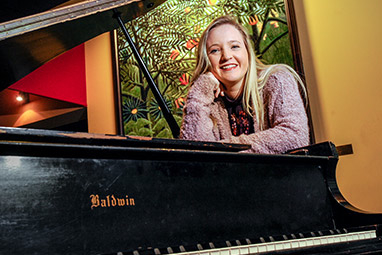 SPARTANBURG, S.C. — One Wofford College first-year student is taking on the titles of composer, lyricist, playwright and director all at once. Keeley O’Keefe, an accounting and finance double major from Charlotte, N.C., is in the final stages of writing her own musical, currently untitled.

The musical will follow the lives of different teenagers as they struggle with mental illness and eventually must cope with and overcome the suicide of a friend. O’Keefe says the final product is meant to be more of “an awareness campaign in the form of a musical that can help to end the stigma on mental health.”

Inspired by personal experience, O’Keefe also has included the experiences of others who have dealt with depression and suicide.

“One of my friends attempted to end her life, and thankfully she was found by her mom. She was saved, but for a lot of others, that’s not the case,” says O'Keefe. “Suicide is not something I would wish on anyone, to have someone that close to you die, especially when you’re that young and have your entire life ahead of you.”

Perhaps considered a non-traditional medium, O’Keefe selected musical theatre to present her story because of its versatility as well as her passion for it. She started playing the piano at the age of 4 and has performed in the orchestra pit during high school theatre productions before coming to Wofford.

“At 12 years old I saw ‘Wicked’ with my mom, and since then I’ve been hooked. I worked at the Blumenthal Performing Arts Center in Charlotte and was able to see the different styles of shows,” O’Keefe says. “I figured if someone can make a musical about our first treasury secretary and his success, I can talk about depression and anxiety and illness, which is probably more relatable than someone who has been dead for 200 years.”

O’Keefe says words cannot always express various aspects of life, but music as the “universal language” can while also providing a dual layer of meaning through the intricacies of both music and lyrics.

The first act of O’Keefe’s play is written in the major key, while the second act is entirely in the minor key except for the final reprisal, which shifts back to the major key.

“The ending is meant to show that life isn’t all bad. There is the possibility of life improving. Although everything that went wrong in the first act doesn’t exactly go right, it does get better,” she says.

O’Keefe has written all of the music but hopes to finish editing over the summer. She plans to copyright the production and wants to premiere the show in the fall.

“It’s an incredibly small cast for a musical, with limited stage direction,” she says. “I don’t want to limit it to just Wofford students, so I’ll hold a community call that can involve as many people who have struggled with and are passionate about mental health as possible.”

The structure of the play calls for very few props and limited scenery. The actors interacting on stage “paint the scene with the words and the music.”

“At the end of the day, I want people to leave understanding the struggle — when you wake up and can’t convince yourself that you can stand because you think you’re going to fall apart,” O’Keefe says. “It’s not a decision. You can't choose not to be depressed or anxious. Depression or mental illness is not something you can just shake off, and it's something that can happen to anyone.”