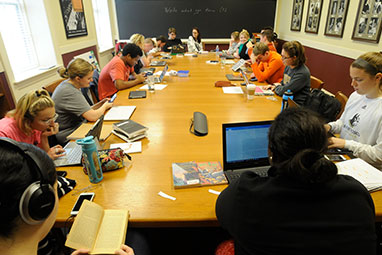 SPARTANBURG, S.C. (February 17, 2017) — During the month of January, a band of Wofford students wrote hundreds of thousands of words. They wrote for fun, for credit and, most importantly, for growth.

“I want to encourage my students to write and to love writing and to be able to talk about literature, but in the end it’s really about building discipline,” says Dr. Tracy Revels, professor of history, who taught The Writer's Workshop during Interim.

Lee Holden, a third-year history and philosophy major, enjoyed the discipline and structure of the class.

“I got a feel for the day-to-day grind of writing. It really comes down to persistence,” says Holden. “It’s useful for people who struggle with putting words to page. This class put an emphasis on writing no matter what because you can only move forward if you keep trying.”

The class spent their days speaking with other writers, such as Wofford’s own Farahnaz Afaq ’18, who wrote her own autobiographical children’s book based on her story as an Afghan refuge. She took The Writer’s Workout the prior year to learn writing techniques and devices and to practice using a variety of prompts.

Prompts ranged from trying to portray one specific emotion or taking photos of people from the Victorian era and creating backstories and situations for them. Samantha Wagner ’17 used this latter prompt as a springboard for the piece she read at the class Coffee House event, during which every student read their favorite work.

Wagner, a humanities and Spanish double major with a business minor, is thankful for the class for reminding her how to write for fun.

“I’d forgotten what it was like to write for prompts not for page numbers, so it was a wonderful sort of refocusing of my interests,” says Wagner. “Creative writing requires the writer to synthesize experience, knowledge and imagination into one work. It is the intersection of critical thinking and creativity and thus is a crucial part of a liberal arts education. It’s been invaluable for my time at Wofford and will be so moving forward.”

At the end of the day, Revels says the class’s focus on writing is foundational to education as well as forming healthy, well-rounded and interesting individuals, but also for community building.

“I’m not involved in the creative writing program at Wofford, but writing is very much a part of who I am,” says Revels. “So when students write, I write with them. I wanted to create an open environment where we could all share and bond. ... There is a community here at Wofford that writes and encourages others to write so I hope my students can find a place within it."