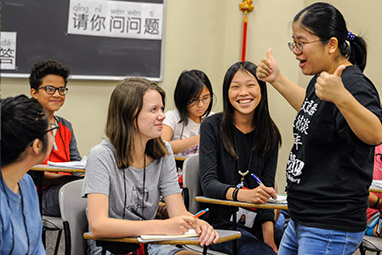 SPARTANBURG, S.C. -- Kelsey Morse, a 14-year-old, proudly sports panda pins that he purchased at the Chinese market at Wofford College.

“If I ever go to China,” he says, “I would be able to ask how much things cost and then buy them, which is a great skill to have. I can practice that here, and feel comfortable doing so because of the process used at STARTALK.”

Now in its fifth year, STARTALK at Wofford offers local middle and high school students the opportunity to learn Chinese language and culture. The two-week intensive immersion experience is free of charge and designed to increase the number of Americans learning, speaking and teaching critical-need foreign languages.

Dr. Yongfang Zhang, director of the program and assistant professor at Wofford, has been running the program since its inception.

“We want to make the students feel like what they’re learning is meaningful to their lives, it’s not just something thousands of miles away. … The experiences and topics we cover are very real, whether it’s transportation in China or living with a host family. If in the future they go to China, they will most likely have these very same experiences,” says Zhang.

The intensity of the program has attracted returning campers. Reagan Moore, a 12-year-old from Inman, S.C., is back for her second year. “My favorite part about the program is the challenge,” she says. “They teach you a step above your level, which allows us to have room to grow… and everything you learn is being used and being polished throughout the camp.”

Some students have enjoyed their time with the program so much they have returned as peer mentors to the younger students. Kelsey Wong attended the camp for two years, but was asked to return even after finishing all of the available learning modules.

“Even though I’m helping in the beginner level classroom right now, I’m still learning new things. It’s an ongoing process. You never stop learning,” Wong says. “That’s the best way to learn, is to be surrounded by it. Within the first week you can find yourself thinking strictly in Chinese, without trying to translate first from English. Your mind can do incredible things when it’s completely immersed in the language.”

Zhang, alongside veteran and visiting teachers and STARTALK staff, works to keep the students engaged and fully immersed, introducing things such as a marketplace, where students can spend camp money they have received throughout the day for “excellent work, significant improvement or eagerness.” Students in the camp also use the app FlipGrid so they can record and share videos of themselves speaking Chinese.

“The longer we can engage them, the better,” says Zhang. “We want them to extend their learning from day camp to the evening and really encourage them to do more, to polish their work and make it better.”

STARTALK at Wofford features language learning, project modules on topics such as pronunciation, the writing system and Chinese cultural activities, including painting, calligraphy, dancing and theatre.

“The more connections you make with the world and different people, the more you can learn from each other and the more you can gain,” says Moore. “Even speaking one other language and being bilingual can help with that connection and that knowledge and then that language can be used in the most unlikely places.”

STARTALK at Wofford is made possible by a $86,059 grant from the National Security Agency (NSA). STARTALK’s mission is to increase the number of U.S. citizens learning, speaking and teaching critical need foreign languages. STARTALK offers students (K–16) and teachers of these languages creative and engaging summer experiences that strive to exemplify best practices in language education and in language teacher development. The Office of the Director of National Intelligence (ODNI) launched STARTALK in 2006 and delegated executive oversight of the program to the NSA. The NSA in turn awarded a contract to the National Foreign Language Center (NFLC) at the University of Maryland (UMD) to act as its subject matter expert in the implementation and administration of the program.