Summer program in Dallas assists with literacy programs for children 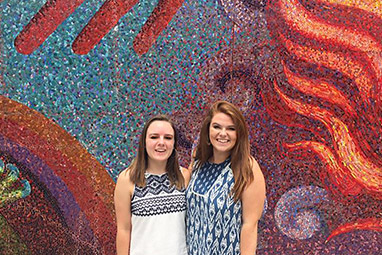 Claire Scavone, left, and Emily Griffin interned with Project Transformation last summer and will return this year, along with four other Wofford students.
2017-06-06

SPARTANBURG, S.C. – Emily Griffin thought her internship last summer with Project Transformation in Dallas, an AmeriCorps-affiliated program that serves children and youth in under-resourced communities in summer programs to support literacy, would help her enhance her own skills with the Spanish language and give her the opportunity to work with children.

Claire Scavone looked at her experience as “just another job and as a way to live away from home for the summer.”

Both of the Wofford College sophomores got more than they bargained for from the national program that pairs college students with low-income communities to help increase literacy levels for those in the communities.

“Not only was I able to work on my language skills in Spanish, but I was able to increase my understanding of the Hispanic community, make connections through Dallas and now have a network of people I worked with that I continue to stay in touch with,” says Griffin, a Spanish and finance major from Fair Play, S.C. “Spanish is my biggest passion, and working with Project Transformation allowed me to see that passion grow.”

Scavone enjoyed a similar experience. “I had a much more informative and fulfilling experience than I ever could have imagined,” says the Spanish and international affairs major from Charlotte, N.C. “In the end, I learned so much about happiness and resilience from our kids that I don’t think I could have experienced anywhere else.”

That’s why she and Griffin will return this summer, serving in leadership capacities this time around.

Griffin will train other volunteers to read with the children. “Points of instruction will be teaching these volunteers reading patterns of students who speak other languages and tools to increase and grow literacy levels throughout the summer,” she says.

Meanwhile, Scavone will work with middle school children this summer, rather than elementary school children as she did last year. She’s returning, she says, “Because it’s really important for me to do something fulfilling, important and worthwhile. While I will be doing much the same thing that I did last year, this summer at Project Transformation will only teach me more.”

Griffin and Scavone both encouraged other Wofford students to apply and participate in the program by talking to various classes and one-on-one with their classmates about Project Transformation. Griffin also spoke to assistant professor Dr. Amanda Matousek’s Modern Languages and Cultures class as part of the department’s Service and Engagement Presentation Series, where she was able to recruit several students.

“Wofford students have been competitive for Project Transformation internships because they have a track record of using their language and intercultural skills in the Spartanburg community through Wofford civic engagement work,” says Dr. Laura Barbas Rhoden, professor of Spanish and a mentor for Wofford students in a number of community projects, including the Spanish Academy at E.P. Todd Elementary School and the Arcadia Volunteer Corps in that community.

“Project Transformation has been terrific for Wofford interns,” she continues, “offering them training, leadership development and a network of peers and mentors from across the U.S. Since the program is an AmeriCorps-affiliated program, the educational stipend the interns receive at the end of the summer of service is something they can bring back to Wofford to help with college expenses or use for Interim travel. I can't say enough about the opportunity, and the ways our students have thrived with Project Transformation.”

Kalle Davis, who graduated from Wofford in 2014, says participating in the program “was a complacency-shattering experience. It opened my eyes to what is capable for kids and is a huge reason why I joined Teach for America after graduation from Wofford. I knew I wouldn’t be happy doing anything other than empowering leaders to transform communities and dismantle systems of oppression to change the story for our kids, with a little fun and a lot of love.”

Griffin plans to continue service work for a year or two after her graduation from Wofford, before going on to get a master’s degree. “I either want to work with the Peace Corps or Teach for America and use my passion for Spanish as well as my interest in service in low-income communities. Afterward, I’d love to work as an ESOL (English for Speakers of Other Languages) teacher and eventually be a school counselor.”

Affiliated with the United Methodist Church and AmeriCorps, Project Transformation serves more than 1,000 underserved children each year from sites in Texas, Oklahoma and Tennessee. With its mission of engaging young adults in purposeful leadership and ministry to support underserved children and families and connect churches to communities in need, Project Transformation relies on 100 student interns every summer.

This is the 11th year that Wofford students have participated in the program.