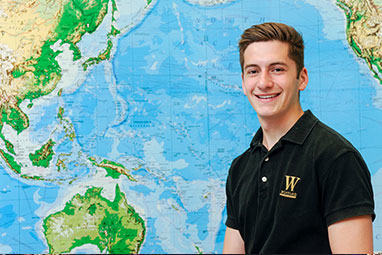 SPARTANBURG, S.C. – Three is a lucky number in Chinese culture, and Brandon Berardo, a Wofford College Chinese major and finance minor from Clover, S.C., is counting on it as he plans his third visit to the country, this time as a Peace Corps volunteer.

“I’ve been captivated by the country from the past two times I have visited,” says Berardo, who graduates from Wofford in May. “I feel passionately about the country and I hope that, through my experiences and my future volunteering there, I can spread awareness and provide knowledge. There’s this perception of China, this sort of façade created by the media and news, but I want to show what it’s really like at the grassroots level.”

Berardo is no stranger to travel. At an early age, he visited family in Italy, which sparked a love for traveling that was further deepened through a summer internship in India with The Space in the Mungo Center, Wofford’s professional development program. Through his various experiences, an interest in opportunities such as the Peace Corps was born.

“I was considering different options for after graduation, and I researched some more into the Peace Corps,” he says. “After looking into it, I felt a particular connection with the volunteer aspect of it as well as the incorporation of the language. I was worried about losing my Chinese proficiency after graduation, so the Peace Corps really aligned with my interests. I can practice my Chinese, but I also can give back to the global community through use of my Chinese and native English.”

Berardo will begin a three-month training process this summer before placement at a two-year site in the fall. He will be in the education sector of the Peace Corps, which means he likely will teach English at the secondary level.

“In my opinion, one of the main goals of being a teacher is to help your students grow and prosper within themselves, so I want to facilitate my students’ success through my knowledge of English,” says Berardo, who had not considered a career in teaching until now. “I believe I can learn from my students as well, through their experiences and their outlooks on life. They can certainly provide a new perspective on the world.”

The Peace Corps also provides its volunteers with the opportunity to create and engage with community outreach programs, a path Berardo hopes to follow. As a member of the club soccer team on campus and a lover of athletics, he “would love to start some sort of sports program based on the school’s needs.”

While abroad, Berardo plans to maintain blog, which can be found at BCBinthe PRC.wordpress.com.

“Over the past four years and over the course of the next two years, I think that I will have developed a relatively strong understanding of not only the Chinese language, but also the culture as well as the business practices,” he says. “I believe this knowledge and these strengths will play a pivotal role in a future career that integrates a continuing relationship with China.”

Ultimately, Berardo hopes his 27-month volunteer commitment with the Peace Corps will help to spread awareness and recognition of the program. The Peace Corps has placements in more than 60 countries, from South America, Central America, Africa, Asia and eastern Europe. The volunteer positions for each site then are divided among the sectors of agriculture, community economic development, environment, health, youth in development and education.